Spy Kids: All the Time in the World in 4D 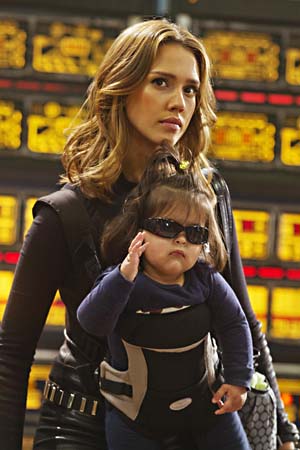 Robert Rodriguez's family-friendly tweener spy franchise continues ever onward, even as original spy kids Carmen and Juni Cortez (Vega, Sabara) have grown up and diversified since 2003's Spy Kids 3-D: Game Over. They return, however, to assist a new pair of spy kids, Rebecca and Cecil Wilson (Blanchard, Cook), the step-children of secret OSS agent-cum-mom Marissa Wilson (Alba). Time, or the creeping lack thereof, is on everybody's minds these days, including, apparently, Rodriguez's. Much has been made of the importance of spending time with your family and loved ones throughout the entirety of the Spy Kids franchise, but here the message is made literal, as time itself is being stolen from the world by the clock-masked evil genius the Time Keeper (Piven). When Marissa is assigned to hunt down the timepiece-happy maniac, her true identity as a super-spy is unavoidably revealed to Rebecca and Cecil, who immediately realize the cool potential of having a spy for a stepmom. Spirited, Austin-based fun ensues, with Jeremy Piven essaying multiple roles and Ricky Gervais voicing the robotic family dog. Far more coherent than its immediate predecessor, Spy Kids: All the Time in the World in 4D benefits greatly from its two likable young leads and some of the series' wittiest, pun-filled writing. The Time Keeper's minion, Tick Tock, in particular, has some of the most forehead-slappingly bad puns and intentionally clichéd action-movie retorts you're likely to come across this year. There's plenty of inventive action set-pieces (and we'd expect no less from the man behind Austin's Troublemaker Studios), a large helping of heart, and tweener-specific gags galore scattered throughout, and virtually all of Downtown Austin appears in the background at one point or another. As for the film's much ballyhooed "fourth dimension," it turns out to be a John Waters-inspired scratch-'n'-sniff card that periodically allows you smell – sort of – what the characters onscreen are sniffing. Meh. Ultimately, a Spy Kids film triumphs or fails on the strength of its script, and Rodriguez was presumably inspired by the rapidly approaching adulthood-and-beyond of his own children when he conceived the idea of time as both enemy and friend to families everywhere. After all, who hasn't been guilty of killing time better spent with kith and kin?