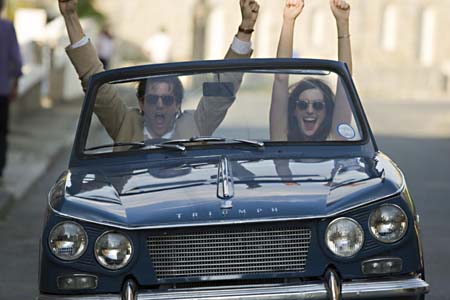 Following the same template as the ingratiating source novel by David Nicholls (who also wrote the screenplay), One Day charts 20 years of a relationship's ups and downs in one-day blips. Touching down on the same day, July 15, every year, One Day starts in 1988, with study-in-contrasts classmates Emma (Hathaway) and Dexter (Sturgess) falling into bed with each other on their last day at university. Emma – nerdy and socially conscious in an abstract, petition-writing way – nervously strips down and puts on Tracy Chapman for make-out mood music; put off, the posh, glib Dex shrinks back: "Maybe we can just be friends." It's a wonder their story doesn't end there. Yet they soldier on as just that, lifelong friends who fumble – sometimes together, sometimes not – through the newly adult landmarks of first jobs and failed love affairs. Perhaps inevitably, the book's structure plays in a more gimmicky way onscreen. It strains credulity that a single calendar day could have so many discrete, capital-D dramatic occurrences, and the way in which Dexter and Emma's relationship evolved on page – leisurely, with time and expanse for interior exploration and character specificity – is reduced here to Polaroid-like portraiture. There are, in short, 364 days' worth of blanks to fill in for each of those 20 years, and the film's tiny yet defining filigrees – as when twentysomething Dexter casually plays with Emma's hair, in an intriguing push-pull between platonic intimacy and lightly soused foreplay – are so few that their hey-look-at-that! rarity ruins the subtlety of detail. There was a lot of hubbub about the casting of American Anne Hathaway as Emma, and indeed the trailer did seem to hone in on her more awkward wranglings with an accent. But she matures plausibly, from the gawkiness of young Emma to the steeliness of middle age. Sturgess, saddled with a caddish character, is less compelling, but he does provide the film's only spot of unloosed, raw emotion. Everything else feels too precisely and too compactly assembled for much impact. You could argue it's the structure that's so distancing, yet director Lone Scherfig's last film, the overpraised An Education, was just as detached. But where her cool-to-touch adaptation trumps the book is in how it cuttingly conveys the way stasis settles in – how whole years can whiz by without one's circumstances changing one whit. (It's why a lot of us stop keeping diaries: It's just too damned depressing to flip from year to year and recognize the same complaints, the same calls to action never heeded.) That – the illumination of our limitations, our awful habitualness – probably wasn't the effect this wannabe-epic of romantic yearning was going for, but it's a considerable accomplishment nevertheless. 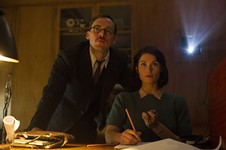 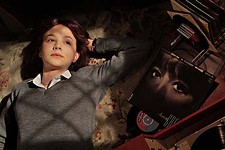 An Education
Everything about Scherfig’s coming-of-age story about a girl in the London suburb of Twickenham in 1961 is spot-on.