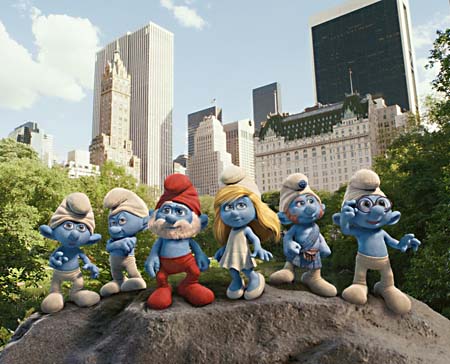 The good news is that there is no news in the land of Smurfdom. The cartoon creatures are still blue, three apples tall, cheerful as all get-out, and annoying as hell. Each is named after after his disposition (i.e., Brainy, Clumsy, Grouchy). There’s only one girl, Smurfette, who is here voiced by Katy Perry (“I kissed a Smurf, and I liked it,” she coos in what passes for sophisticated humor in this mixed live-action/animated film.) One of this miniature blue-man group’s chief distinctions is that the word “smurf” is used as a verb, adjective, and exclamation so that the self-promotional term is uttered at least once in every scene. (I’m not going to sit through it again to double-check the veracity of that statement, but the scenes in which the word is uttered multiple times surely even things out.) Having directed Scooby-Doo and Beverly Hills Chihuahua, Gosnell is becoming something of a mixed live-action/animation expert, so you would think that by now his compositions would look less like human beings clutching at tiny, imagined Smurfs that are going to be filled in later. The plot lands the Smurfs in New York City, where they end up bunking with Grace and Patrick Winslow (Mays and Harris, who did not become the toast of the Emmys and Tonys for roles such as this). The Smurfs are being chased by the evil but inept wizard Gargamel (played as a human cartoon by the live-action Azaria). Tim Gunn shows up in a subordinate role, and Joan Rivers and gossip columnists Liz Smith and Michael Musto also appear in split-second cameos. Much chasing and escaping of Smurfs occurs at a frenzied pace, which, instead of an organic thing, seems designed to keep young ones’ eyes glueed to the screen. Yet what the kids at my screening seemed to like best was the wizard’s cat, whose mouth is computer-manipulated to utter pithy asides. It’s a good thing they couldn’t hear my mutterings: They were definitely not PG content.