A few contrivances too many make this otherwise appealing romantic comedy seem occasionally ungainly, yet its sensational cast manages to breezily flick away most distractions. Crazy, Stupid, Love. is directed by Glenn Ficarra and John Requa, the team that directed I Love You Phillip Morris and wrote Bad Santa, so we know from the get-go that the helmsmen share delightfully skewed sensibilities. This new film is not nearly as demented as either of those efforts if only because its characters are less hyperbolic and more down to earth. As Cal Weaver, the character at the center of this love storm, Carell delivers more a dramatic turn than straight-out laughs, although the mere demeanor of his confused everyman always packs a chuckle or two. In the film’s opening scene, Cal’s wife of more than 25 years, Emily (Moore), informs him that she wants a divorce and that she has cheated on him with a colleague. Gobsmacked by the news, Cal moves out of their house and into a midlife tailspin, feeling like both a cuckolded schnook and a man who is still deeply in love with his wife and family. While moping over his misfortune at a singles bar, he is inexplicably taken in hand by the resident Lothario, Jacob (Gosling, magnificent in this rare comedic turn), who makes over Cal’s schlumpy attire and stale pickup lines in his own image. As good as Gosling is as Jacob, it still makes no sense that this self-serving narcissist would bother himself making over a guy like Cal. Several other love stories circulate around the broken marriage of Cal and Emily, not the least of which is the infatuation of their 13-year-old son (Bobo) with his babysitter (Tipton), who in turn starts to crush on the made-over Cal. As usual, Marisa Tomei steals all her scenes, and Emma Stone demonstrates that she is one of the greats among the rising generation of actors. There’s nothing, however, that can explain why Cal wears eyeglasses in the film’s opening scene although they’re never to be seen again, and only screenwriter Dan Fogelman (Tangled) can explain the film’s awkward punctuation. The goopy climax at a junior-high graduation ceremony threatens to undo much of the good will that Crazy, Stupid, Love. has accrued up until that point, but maybe it’s simply an example of the “stupid” part of the story. Still, as far as nonraunchy, adult-geared rom-coms go these days, Crazy, Stupid, Love. leads the pack by several heads. 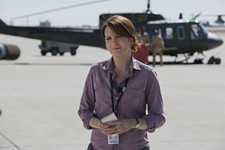