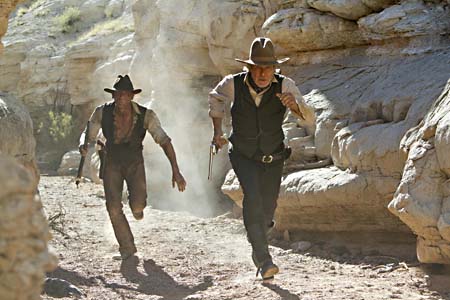 Traveling far afield from the pleasurably pop terrain of his Iron Man films, director Jon Favreau has made here a classical Western, polished and professional. Don’t get hung up on the aliens part of the equation, the post-ampersand sub for the more canonical cowboy foe, “Indians”. For better or worse (and I’d argue the latter), the aliens are as monolithically evil, unformed, and un-individuated as characters as Native Americans once were in the earliest of Westerns. Now, we’ve come a long way since then, and certainly contemporary audiences have thrilled to revisionist spins on the genre – the morally complex and linguistically exquisite Deadwood, for instance, and Firefly, with its cowboy rowdies in space. Cowboys & Aliens wants none of that. Aliens aside – and we’ll get to them – this is a purist remodel, meaning it maintains a straight-faced, strict adherence to strong, silent gunslinger types and the discomfiting but historically conventional idea that taking up arms is a requisite step on the path to becoming a man. A real man, that is, not some namby-pamby in rounded spectacles like Sam Rockwell’s Doc. With his M.D. credentials apparently of mere avocational interest in the Old West, Doc tends bar in the dusty town of Absolution, into which Daniel Craig’s amnesiac, no-name cowboy stumbles, bleeding and with a bizarre ferrous device affixed to his wrist. Working from a most-wanted poster, the sheriff (Carradine) identifies him as the criminal Jake Lonergan, but before he can hand Jake off to federal marshals, alien rocket ships attack Absolution, lashing and abducting citizens like so much cattle. His wrist shackle suggesting a past brush with the aliens, Jake agrees to reclaim the snatched citizenry with the aid of the mysterious Ella (Wilde), who has a personal beef with the aliens, and Ford’s despot, Woodrow Dolarhyde, who rules Absolution less with an iron fist than a sourpuss snarl. Thus begins Cowboys & Aliens’ best stretch, a satisfying and tonally true take on the building of a posse and the hard-fought camaraderie among these cowboys – which, if you’ve done your homework, you know will be tapped later when somebody (or bodies) kicks the bucket. Through this stretch, the aliens are revealed in a sort of burlesque strip: a hint of spitty fangs here, a tease of goopy innards there. When the full-meal deal is finally unveiled, the effect is kind of meh, but then, even in the classic cowboys and Indians pictures, the preamble is always more interesting than the final battle. So it goes here, and that battle is an overlong bloodbath that barely qualifies for a PG-13 rating. The outré premise, of course, had us all sniggering in advance, prepared for a goof; by taking the task so seriously, Favreau has produced a film true to the genre. So true, in fact, that Cowboys & Aliens is terribly generic – and mostly joyless, too.