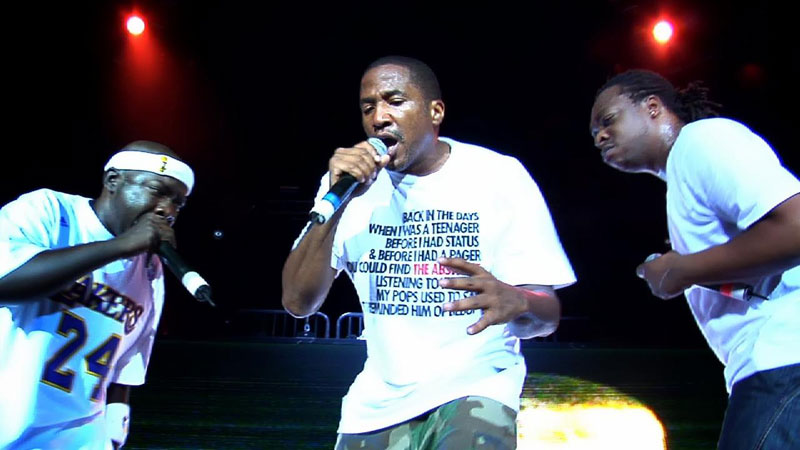 Beats, Rhymes & Life: The Travels of A Tribe Called Quest

Actor turned first-time documentarian Michael Rapaport mostly keeps himself off camera in this admiring portrait of the seminal Nineties hip-hop outfit A Tribe Called Quest. But his voice – an upper-register whine that pitches even higher at the end of his sentences, like he's ever on the verge of a tantrum – does enter the picture, and it grates on the nerves, especially when coupled with his pushy interview technique and a shaky cam in the film's opening scene shot at a rancorous reunion show. The beginning doesn't bode well, but all it takes to wash out the bad taste is Tribe's immortal anthem "Can I Kick It?," an instrumental version of which accompanies the kinetic opening credits. Animated with an eye for graffiti art, the sequence – by James Blagden and Philip Niemeyer – works with the same color wheel and etching style of the band’s early cover art. Alongside the one-two punch to the solar plexus of the song's sampled bassline and snare, this opening incites both nostalgia and excitation, and those good vibes propel what is a fairly straightforward account of the band's formation, album output, and acrimonious breakup. Rapaport gathers adulatory testimonials from Pharrell Williams, the Roots, the Beastie Boys, and other bold-faced names of hip-hop past and present to accompany his interviews with the band's original four members: de facto leader Q-Tip; the diminutive Phife Dawg, whose health problems fuel the film’s emotional crux; sanguine DJ Ali Shaheed Muhammad, caught like a bewildered child between the brawling Q-Tip and Phife; and Jarobi White, who left the group early but returned often. White couldn't stay away, and neither can the band's legions of fans, who bop up and down in sold-out arenas at the reunion tour that provides the film’s hopeful coda.