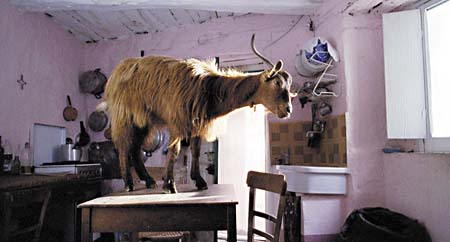 An aged goatherd daily tends his livestock, though his hacking cough signals the near end of his life. The man dies, and a goat is born. Later, the goat kid is separated from its herd and seeks shelter under a towering tree. The tree is soon cut down to by men who use it to build a structure. In time, the structure becomes a charcoal pit that provides fuel for life’s activities. It is easy to describe what occurs in Le Quattro Volte; less easy, however, to explain it. Calculatedly meditative yet casually metaphysical, Le Quattro Volte (The Four Times in English) is austere, funny, beautiful, and transfixing. The film is obviously structured to convey a sense of the four seasons, although Italian filmmaker Michelangelo Frammartino is also trying to express something eternal. He loosely bases his film on the Pythagorean theory of the transmigration of souls, and follows the regenerative continuity from man to goat to tree to mineral – another four-pronged construct for identifying earthly matter. Set in Calabria, the hilly, southern area of Italy where Pythagoras once tread, Le Quattro Volte has no dialogue or music, but is nevertheless an aurally rich movie. The sounds of the goats’ bleating, the jangle of their bells, the goatherd’s death rasp, the buzz of a tree chopped to kindling – all will resound in your head long after the movie is over. So, too, will the carefully constructed images that continue for long takes. (One stunningly composed and comical sequence earned the dog that sets off a chain of events a special award when the film premiered at Cannes.) Le Quattro Volte is the kind of film to which the term “arthouse” is commonly attached. However, that should not be interpreted to mean “difficult” or “obtuse.” In fact, this film’s apparent simplicity is, in large measure, its charm and its universal appeal.