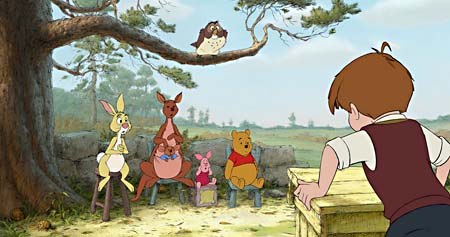 Family doesn’t always age well: You know, that favorite aunt vinegarizes into a sour dowager, cousin Bobby now cooks meth in the kitchen, and so on. For many of us reared on A.A. Milne’s original stories and Disney’s endearing, enduring screen adaptations, Winnie the Pooh and his pals from the Hundred Acre Wood are family; ergo, when Disney announced a new film starring Pooh and company, you’d forgive a girl whose spiritual cousin is a gloom-and-doom donkey named Eeyore for expecting the worst. I needn’t have been bothered. Thirty-five years after Pooh last headlined an animated theatrical adventure, the spirit of the thing – its gentle soul – has been sweetly preserved. The voices, yes, are a touch off: While Jim Cummings uncannily re-creates Sterling Holloway’s special pitch and cadence of the honey-hungry Pooh Bear, his Tigger sounds like Jimmy Durante, if Durante had been a dockworker. (The more famous voices have a leg up; their familiarity breeding comfort, as with late-night TV talk show host Craig Ferguson’s likable spin on Owl with a Rex Harrison-like singsong.) The slim but narratively fecund plot begins with Pooh waking with the knowledge that he has a Very Important Thing To Do, but he's at a loss for what, precisely, that thing might be. (With honey on the brain, it’s hard for a teddy bear to stay on task.) Turns out it’s a case of Eeyore’s missing tail, a topic that the pleasantly discursive story flits to and fro from, giving each indelible character a moment – and occasionally a song – in which to shine. The animation is true to Stephen Slesinger’s original line drawings, unfussy but rich with feeling, while still spreading its wings with nifty set-pieces, as when chalkboard etchings come to life. Winnie the Pooh doesn’t reinvent the wheel, just gives it an affectionate spin, and that is no more and no less than what one would hope from a family reunion. 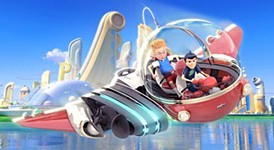 Meet the Robinsons
While Disney’s latest animated feature might not be a sign of the apocalypse, it’s at least a sign that Disney needs to find some decent writers.