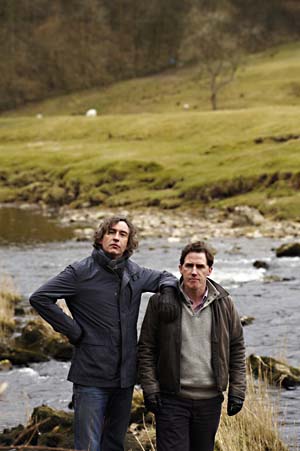 The Trip, a movie about two comedians who go on a foodie tour through northern England, was first broadcast in the UK as a six-part miniseries and then shaved down and shaped into a feature-length picture. The end result is something that is not quite this and not entirely that: a colicky, melancholy comedy that is all shadings and little arc. It's terrific. Dipping back into the meta-shenanigans of his tremendously ambitious 2005 film Tristram Shandy: A Cock and Bull Story, Michael Winterbottom reunites that film's star and co-star, Steve Coogan and Rob Brydon. Here, once again, they play fictionalized versions of themselves, although it's hard to parse what is verifiable fact, what is narrative fancy, and whether the distinction between the two matters at all. The trip in question is orchestrated by the London newspaper The Observer, which commissions Manchester native Coogan to review some of the north's finest restaurants. When Coogan's girlfriend abruptly bails out on the trip, Coogan, seething from the breakup and his stalled career, asks Brydon to come along for the weeklong trip. At first it's hard to figure why: The dyspeptic Coogan – arguably the bigger name, and certainly the better-known actor in America – skirts between being weary of his companion to openly contemptuous. Brydon, a sitcom and radio star in the UK, has a dopey, open quality, and he seems, as portrayed in the film, rather blissfully uncomplicated, taking palpable pleasure in the landscape, the food, his wife and newborn back at home, and his own giggling armory of celebrity impressions. He's the yin to Coogan's prune-faced yang; after comparing backaches and receding gumlines, Coogan's capper – that "everything's exhausting at this age" – isn't a punchline, it's a cri de coeur keyed to a wistful piano score (cobbled together from earlier works by composer Michael Nyman). But these characterizations aren't established and then locked. Coogan has moments of such soulfulness, the jaw drops, while Brydon nearly breaks in a late scene that's like some manic bender. The Trip doesn't carry much in the way of plot – it has more, shall we say, topics of interest than real conflicts – and it rather refreshingly buries information that might have been molded into a more traditional narrative arc. One can imagine what a Hollywood scenarist would have done with what plays almost as an afterthought here, that Coogan is mulling a job offer on American TV, which would necessitate a move away from his two children. It weighs on his mind, like a lot of things do, but he doesn't give any speeches about it, and he doesn't give any speeches that are pointedly not about it. (Which puts me in mind of an article some robo-screenwriting service recently sent me called "Subtext Made Easy." Must we not work for anything anymore?). So yes, the plot, as it were, is the peripatetic; the point, as far as I see it, is to burrow deeply into the way these two damaged, lightly deranged humans communicate. Winterbottom is keenly sensitive to how connections spark or sputter between them – in the way Coogan warms most to Brydon in the car, where they don't have to make eye contact, or how a flurry of micro-expressions may pass between them when a punctilious waiter references the "sack" of juice or coulis or some such a dish is nestled in. I should mention, also, when it's not being desperately sad about Our Ever Advancing Age and the Inescapableness of Our Very Bad Habits, The Trip is also screamingly funny. Like I said, terrific stuff.