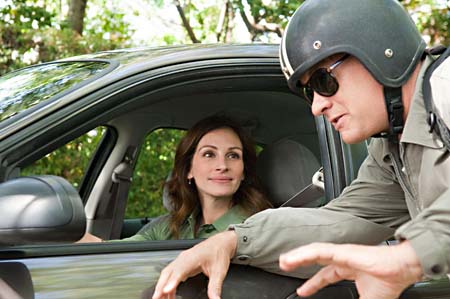 Co-written by Tom Hanks and My Big Fat Greek Wedding's Nia Vardalos, Larry Crowne is a slight, facile, and ultimately yawn-worthy romantic comedy, and one of the most obvious if unexpected missteps in Hanks' career. As the titular character who returns to college after being fired from his Walmart-esque job, Hanks plays up the farcical elements of the story by mugging, wearing far too much makeup (honestly, he looks like nothing so much as a creepy, grinning automaton), and ruminating on nothing much at all. Larry Crowne makes Forrest Gump look like Albert Brooks. The film strikes the wrong note in the very first shot, which introduces Larry as a (too) energetic and (too) amiable cog in a far larger machine. Once that machine spits him out – No bachelor's degree! Oh, the ignominy! – he hightails it back to his local community college where in short order he's befriended by the strangest, most improbable scooter gang since the Who's The Kids Are Alright. Led, more or less, by the impossibly cute and chirpy Talia (Mbatha-Raw, late of Doctor Who), Larry finds his life, his haircut, and his living room transformed by this sprightly thing, but his heart's true calling arrives in the form of his speech teacher Mercedes Tainot (Roberts), a chilly, alcoholic woman married to a porn-surfing ex-prof turned lazy novelist (Cranston), who, in turn, creates tangential complications that have little narrative value. From there on out, Larry Crowne is an exercise in terrible, pointless filmmaking. Not only do the two leads have far less chemistry than they showed in Charlie Wilson's War, the script cobbles together all sorts of silly nonadventures for the two of them. In fact, the only saving grace in the whole of Hank's misbegotten movie comes from former U.S.S. Enterprise helmsman George Takei. As Larry's oddball economics professor, Takei struggles mightily to get some laughs flowing, but even he fails at the task. Larry Crowne may be the blandest, most white-bread rom-com in the history of the genre, instantly forgettable and more than a little embarrassing for its two superstar leads.