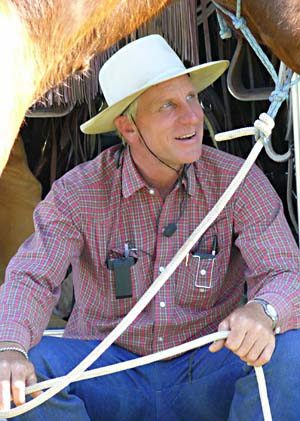 To hear his fans and clients tell it, the natural horseman Dan "Buck" Brannaman has what at first appears to be an almost mystical connection to the equine mind. He's less a horse whisperer, as popularized in Nicholas Evans’ book or Robert Redford's film, than a calm, cool cowboy who just plain gets horses more than most riders and ropers. That has plenty to do with his childhood, and it lends credence to his description of certain "unbreakable" horses as orphans, unwilling to give respect, unable to bond with the humans who ride them. To Brannaman's mind – and it makes perfect, literal horse sense – the horse is every bit an extension of the rider's body, and vice versa. If it seems mystical maybe in a way – a compassionate way – it is. After all, the old vocabulary of horses having to be "broken," or being unbreakable, implicitly implies destruction, cruelty, and a cold superiority on the part of the human. What it doesn't imply is a whole lot of humanity. Brannaman, who spent his childhood as part of a blindfolded, trick-roping, preteen sibling act (he was featured, along with his brother, in a wholesome, all-American Kellogg's Corn Pops television advertisement), also lived in terror of his alcoholic father Ace, who would nightly administer whippings so bad that at one point young Brannaman fled into the subzero Montana night sans coat and ended up spending the night in a 50-gallon drum alongside the family dog. Eventually, the local deputy sheriff in his hometown of Ennis, Mont., intervened. Brannaman and his brother were sent to live with a foster family and things changed for the better. Now lanky, laconic, and in his 50s, Brannaman shares his philosophy and horseman's expertise at some 40 clinics a year, traveling from small town to smaller town in an RV, sometimes with his wife or daughter, teaching people how to handle their four-legged charges with the firm but gentle respect the animals deserve. The results, by all accounts, border on the miraculous, as both horse and rider are transformed from two distinct and too-often conflicting personalities into one. Wild young studs who've broken their owner's backs (or taken bites out of them) are rendered respectful and ridable in, it seems, minutes. Meehl's documentary features plenty of interviews with cowboys and ranch hands who've had their lives – and their horses' lives – changed by Brannaman, but it lacks the literary or cinematic magic of either version of The Horse Whisperer. How, exactly, Brannaman achieves his singular, often instantaneous rapport with the wayward horses is explained, but it's a difficult process to show. Much of what he does is accomplished with a glance, a stroke, a subtle shifting of his weight on his mount. That said, it's still a remarkable portrait of a survivor helping others – other species, actually – to survive on their own terms. 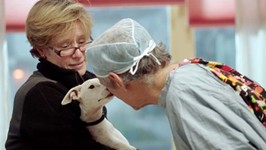