The Art of Getting By

The Art of Getting By premiered at Sundance in January as Homework, a title that more accurately reflects the arduousness of sitting still through this flaccid, endlessly irksome coming-of-age drama. First-time writer/director Wiesen has called the film "personal," which reads to me like code for "autobiography about how that hot girl in high school wouldn't give me the time of day, probably because I was a cookie-cutter rebel with a battered copy of The Stranger and nothing remotely distinctive to say." But that's pure speculation. Freddie Highmore – whom you may recall as that kid who played the kid in all those movies a while back – stars as George Zinavoy, a promising artist who nonetheless applies himself with near-athletic exertion to nothing at all: not school, not friends, not family life, not comics or finding kinky stuff online, and certainly not the exploration of his own emotional terrain. Zip. Kids like this exist, sure – didn't we all have our embarrassing dalliance with existentialism, after all? – but still, I mean, Jesus. Eyelash-pulling is preferable to watching this affluent, annoying little shit round the plate from dead inside to marginally more alive. Highmore inherited a poorly articulated character, but a more expressive or soulful-seeming actor might have found a way to tunnel through the script's autopilot quirks (name-drop Leonard Cohen and Louis Malle here) to individuate George; Highmore, alas, brings little more than serial-killer eyes and his native British tongue flatlined into a cadence-free American accent. But he fits right in: The Art of Getting By is an inflection-free film, right down to the climax that’s keyed to the drone of an early Pavement song, an aesthetic choice one suspects the filmmaker made not in service of his film, but because – and this is pure speculation – Slanted and Enchanted is what soothed him back when the hot girl in high school wouldn't give him the time of day. One can hardly blame her. 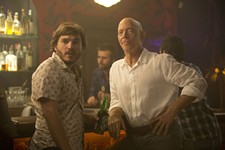