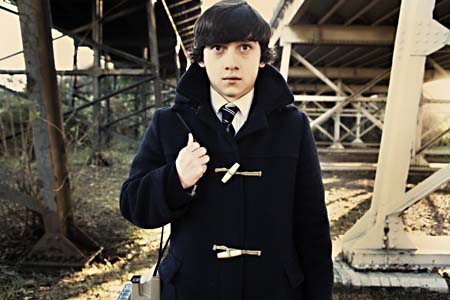 Adapted from Joe Dunthorne's novel and presented theatrically by Ben Stiller, Submarine might seem an unlikely feature debut from British helmer Ayoade. Unlikely because he's known in the States primarily for his work with U.K. cult-television phenom The Mighty Boosh and the bizarro-cool faux Eighties horror show Garth Marenghi's Darkplace, both of which have their tongues planted so firmly in their surrealist cheeks that they're well nigh untranslatable to mainstream American audiences. Those shows are brilliant, surrealistic, and patently goofy, especially Darkplace, which has no Yank precursor that I'm aware of (although the late, lamented The Ben Stiller Show came close at times). Submarine is a wholly different beast, though, and is the better for it. It's a sweet, knowing, bracingly deadpan coming-of-age story that proudly wears its influences on its sleeve – Wes Anderson's Rushmore, Harold and Maude, and Mike Nichols' The Graduate spring immediately to mind – and it's set in a grim and gritty Swansea, replete with concrete council flats and muddy, muddled dreams that'd do Morrissey and Marr proud in their existential despair. It's also the mid-Eighties, a fine time for stewing over the vicissitudes of l'amour fou and raging hormones. That's the case with teenager Oliver Tate (Roberts, in a terrifically sympathetic performance), a baggy-eyed naif who fancies himself more worldly-wise than he may actually be. Two events are redefining Oliver's notion of himself (as savior, hero, and emotionally accessible ladies man): The first is his tentative puppy love for his considerably more cynical schoolmate Jordana (Paige); the second is the slow-motion disintegration of his parents’ marriage. Rarely if ever have I seen a more bracingly honest depiction of spousal malaise than here. Oliver's mousy, stoic father is played perfectly by Taylor, late of Simon Rumley's locally filmed Red White & Blue. If you're only familiar with Taylor's work from that particular disturbathon – or, alternately, as Mr. Bucket in Tim Burton's Charlie and the Chocolate Factory – then his work here will come as a pleasantly downbeat surprise. Submarine is exceedingly well-cast. As Oliver's mother, Jill, Hawkins is a model of barely contained familial frustration; Oliver suspects, with good cause, that she's taken to seeing an old flame, the hilariously self-important New Age huckster Graham Purvis (Considine, resplendent in matching mullet and misplaced, desperate machismo). But this is Oliver's story, narrated by him and glimpsed entirely from his specific point of view, which means plenty of misunderstandings, ghastly schoolyard and social faux pas, and heartache humor. It's difficult to pigeonhole Submarine without resorting to those obvious Wes Anderson influences, but in several ways Ayoade's film is a (relatively) more genuine and organic portrait of semideluded youth in pseudo-revolt. The relationship between the initially straitlaced and refreshingly vainglorious Oliver and his gum-snapping, school-skipping "bad girl" paramour is fraught with the seriocomic perils of Everyteen life but nonetheless rings utterly true. It's a testament to director Ayoade's skills that Submarine very rarely descends into totally twee territory. Beautifully shot by Director of Photography Erik Wilson (a dreamy sequence involving fireworks and first love – in a blighted industrial deadscape, no less – is achingly lovely in every sense of the word), Submarine pulls off the difficult trick of being bittersweet without being saccharine and does so with a quietly riotous aplomb. 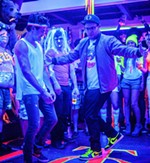