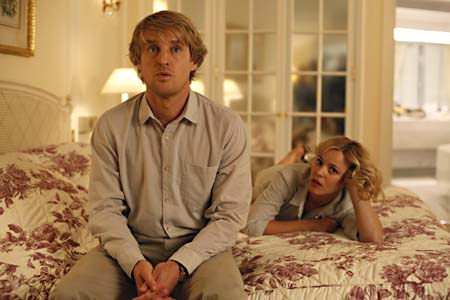 Quite simply, Midnight in Paris is charming – très charmant, to ape the argot of the locals. I say that somewhat tongue-in-cheek, as this is very much an outsider's valentine to the City of Lights. Witness the opening shots of Paris at its most picture-postcardesque – the Eiffel Tower, Sacré-Coeur, the Arc de Triomphe. That would be enough to make most tourists swoon, but Gil (Wilson), a would-be novelist on vacation with his no-nonsense fiancée, Inez (McAdams), has a very specific fantasy in mind: Paris in the Twenties in the rain. Gil, it seems, suffers from something Allen calls "Golden Age thinking," an ineffable ache for a time and place he's never known. During the day, Gil and Inez putter around like regular tourists, checking out this and that, accompanied by one of Inez's former classmates, an affected prat named Paul (marvelously played by Sheen) who likes to play impromptu docent at galleries with the opening line "If I'm not mistaken …" (and he usually is). These scenes aren't negligible – delivered at a rat-a-tat clip, they mark some of the least self-conscious comedy writing Allen's done in a decade – but it's the nighttime where Midnight in Paris really hits its stride. As the clock strikes midnight, Gil discovers quite by accident a portal of sorts into the 1920s. There, he boozes it up with Ernest Hemingway (Corey Stoll, killing it), finds a first reader for his manuscript in Gertrude Stein (Bates), and on a lark pitches future filmmaker Luis Buñuel the plot of the eternally baffling The Exterminating Angel ("But what does it mean?!" Buñuel puzzles after him – indeed). This stretch of the film, when Gil realizes his wildest fantasy and rubs elbows with his cultural touchstones, not only is a riot, but also feels like deeply personal filmmaking for Allen, and Wilson plays his surrogate without turning to the bespectacled one's famous tics. It's not all strictly la vie en rose: A tentative love affair between Gil and the Twenties-stuck muse played by Marion Cotillard pokes along – Allen's women are either too soft or too hard, never just right – and it's easy to anticipate the film's dramatic beats. But considering Allen hasn't made an unqualified success since 1999's Sweet and Lowdown, it's easy to shrug off Midnight in Paris' occasional fumble when weighed against so much cleverness and canniness and, bien sûr, irresistible charm.