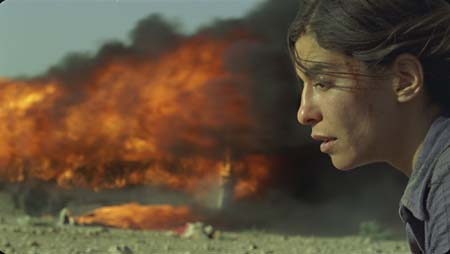 In this French-Canadian epic, the secrets of a mother who was emotionally distant and not well understood by her children during her lifetime are unearthed after her death – and like the contents of a Pandora’s box, the children’s horrifying discoveries can never be rebottled or unlearned. This is the fate of Jeanne (Désormeaux-Poulin) and Simon (Gaudette) Marwan, the twin children of Nawal Marwan (Azabal). As the movie opens, the twins, who are in their early 20s, are being read the terms of their mother’s will, which was prepared by the notary Lebel (Girard), who was also her employer. Nawal left some peculiar, self-abnegating instructions regarding her burial and two envelopes: One is given to Jeanne, who is supposed to deliver it to their father (whom they previously believed to be dead); the other is for Maxim to deliver to the brother that neither knew they had. Simon initially resists his mother’s mind games but Jeanne, a theoretical mathematician, embarks on a journey to their mother’s homeland to discover the roots that she kept hidden from them. The homeland is an unnamed Middle Eastern country that seems a lot like Lebanon. At this point, Villeneuve interweaves episodes of Jeanne’s search with others of Nawal’s young-adult life in this country. Many surprises surface but not until Simon finally joins Jeanne abroad does the ultimate, abominable revelation become manifest, and Villeneuve manages to pull it off in a manner that’s at once artistically oblique and as piercing as a sudden bolt in an ancient Greek tragedy. Villeneuve adapted the film from a play by Wajdi Mouawad, and much of the brilliance of the movie has to do with the way the story is opened up by the location work. Factional religious fighting and retaliations have scarred and disfigured the landscape much like it has traumatized the personal psyche of Narwal. It’s this inbred, self-escalating, and seemingly eternal warring that Villeneuve welds to the story of the Canadian Marwan clan to make its points about the conflict’s horrors. Often it is difficult to figure out which Christian group is fighting which Muslim faction, but the vagaries lend certain realism to the terror. Savage scenes of brutality are sharply depicted, and a sequence in which a bus full of passengers is incinerated will be unforgettable. Although I take issue with certain aspects of the storytelling (much is revealed to us about Nawal that could not be have been learned from her children’s fact-finding tour; other aspects are improbable or outlandishly epic), it would be difficult not to be swept away by the dramatic intensity of Incendies. The film’s eloquent and powerful anti-war statement transcends any quibbles. 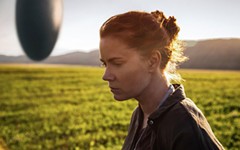