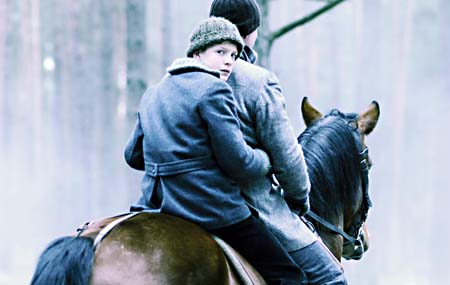 Winter in Wartime, a coming-of-age story set against the bleak, frozen Dutch countryside during the Nazi-occupied winter of 1944-45, grapples with weighty, eternal questions. The issues stem not only from the standard deprivations of the time, but also the timeless mysteries of what it means to be an adult, a hero, and a survivor in a place where managing one out of three isn't a bad accomplishment. Thirteen-year-old Michiel (Lakemeier) witnesses a flaming British fighter plane crash in the woods near his home. What's a bored kid to do but grab his bike and light out, with a pal in tow, to visit the smoldering wreckage? Pursued and caught by German soldiers, Michiel is escorted to party headquarters for a stern reprimand by his father (Thiry) – the local mayor. Young Michiel views his father, the adult, as kowtowing to the enemy; Michiel is inexperienced in the subtle political machinations and manipulations that have kept his family, including his mother (Blok), in the Gestapo's relatively good graces. When he later discovers that the downed British pilot (Bower) is wounded but alive and hiding in the forest, the boy has history thrust upon him, not by choice, but by the random unlucky draw of the war. The abyss between the boy and the man he may become is cold, black, and unforgiving. Adapted from Jan Terlouw's 1972 novel, this is an often emotionally harrowing depiction of a young idealist running smack into the brutal reality of occupied life. Cinematographer Guido ven Gennep matches Michiel's sense of constant unease by maximizing the austere grey beauty of the Dutch countryside (pockmarked though it is by the Germans, who also appear grey, black, and forbidding). The legendary film composer Pino Donnagio (Don't Look Now, Dressed To Kill) adds a melancholy chorus of soaring strings to accompany the film's several sequences of heroism, betrayal, and life during wartime. As Michiel discovers to his horror – and maturation – it ain't no disco.