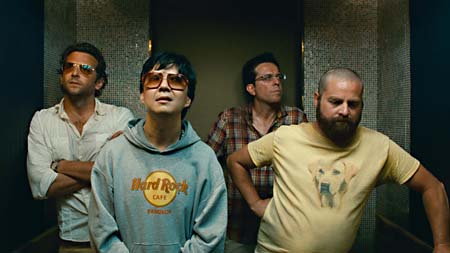 The funniest thing about The Hangover: Part II isn't, as you might expect, the onscreen, prematrimonial chaos involving the returning cast members. No, the real meta-metal yuks commence immediately, with ex-Misfit Glenn Danzig, who croons – there's just no other word for it – "Black Hell," a brand new theme song for the franchise, thereby setting the film's tone of cheerful nihilism. (He also performed a cover of Johnny Cash's “13” in the prequel.) Clearly, director Todd Phillips knows his audience. Or maybe he's just a fan of the Man in Black. Either way, this Hangover is a doozy, not quite as much fun (or well-written) as the original, but neither does it lack for lunatic plot complications that could only spring from the minds of writers Phillips, Craig Mazin, and Scot Armstrong. This time out, it's mild-mannered dentist Stu (Helms) who is the betrothed. Keenly aware that his best pals Phil (Cooper), Alan (Galifianakis), and Doug (Bartha) are something of an unintentional force of nature when it comes to reducing eleventh-hour bachelors to quivering mental and physical wreckage, Stu books the nuptials in Thailand, his intended's birthplace. Soon enough though, these three amigos (Doug, wisely, stays mostly out of the picture) wake up in a ramshackle Thai hotel surrounded by party debris after an all-nighter: Bangkok has them. Ken Jeong's flashy drug-running motormouth Mr. Chow also returns from The Hangover; his character here manages to upstage everything but the tropical Thai locations. Plenty of bad things happen, in flashback, as Stu and the gang fragmentarily recount the previous evening's unhinged debauch. Whereas The Hangover was borderline outrageous as it stacked one mesmerizing vulgarity atop the next, this second exercise in bad manners (presumably of four) feels rote in comparison. Even Galifianakis, a tough comic to write for who nevertheless owns any scene he's in, pales in comparison to the Alan of yore. But hey, if you're into lady-boy anal yuks, drug-running monkeys, and Glenn Danzig, you could do worse.