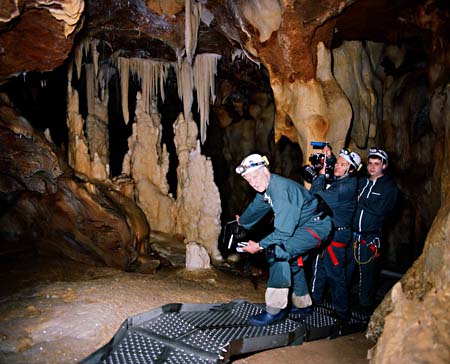 Lions and bison and bears! Oh my! Such images join galloping horses, woolly mammoths, and other remnants of prehistoric life that were drawn on the walls of the Cave of Chauvet-Pont-d’Arc in southern France, probably some 30,000 to 32,000 years ago. In 1994, rock climbers discovered these wall paintings in a cave that had been sealed off by a rock slide for 20,000 years, preserving the images in pristine condition. Generally believed to be the oldest examples of human artwork yet discovered, the images convey a powerful sense of mystery, awe, and connectedness with our human prehistory. Because of the harmful effects of exposure to the 21st century, access to the Chauvet Cave is permitted only a few weeks out of the year to a very select sample of geologists, art historians, anthropologists, and their ilk – and Werner Herzog. This audacious maker of documentary and narrative films received permission from the French government to accompany the scientists into the cave with a tiny crew. What he emerges with is an amazing document and a distinctly Herzogian investigation into what makes human beings tick, no matter the millennium. To a large extent, this is can’t-miss material, especially when witnessed in the film’s 3-D version in which the curvatures, striations, and bumpy irregularities of the cave walls are demonstrably part of the art features that appear to have been used by the artists to augment the vivacity and three-dimensionality of their figures. Cave of Forgotten Dreams has many aspects in common with Herzog’s last documentary, Encounters at the End of the World, in which the inquisitive and reflective filmmaker directs his eye toward a formidable locale little seen by the bulk of humanity and narrates his discoveries and thoughts in his ever-probing, German-accented English. Definitely catch this movie in its 3-D iteration, as Herzog practically schools filmmakers in the technique’s proper use. (The “why” of what you’re looking at ends up mattering more than the “what.”) Herzog uses the cave images to explore ideas about the beginnings of art, while the stained outline of a human hand on the wall leads to an inevitable question about the work of the auteur. Herzog also wanders afield occasionally as his propensity for latching on to eccentric characters finds him interviewing a perfumer and a man who plays “The Star Spangled Banner” on a Neolithic-style flute he has carved. Expendable segments, maybe, but I’d hate to say the same for Herzog’s concluding segment in which he visits a nearby biosphere where he observes an albino alligator that has mutated in response to nuclear facility 20 miles away. Herzog’s glimpses of the future can be as otherworldly and singular as his perspective on the past. (This review has been updated since original publication.)