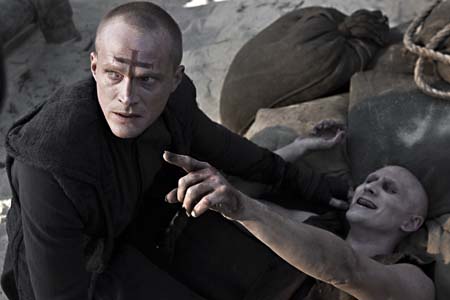 He’s a fearsome soldier who was decorated in a recent war that everyone would now prefer to forget. The hero has become an outsider, neither conforming to his superiors' expectations, nor capable of re-entering civilized society. Now, as the movie begins, he is burdened with the task of rescuing his niece from the heathen enemies who have captured her and killed her parents. His companion on the quest is the girl’s boyfriend, a young man whose ardor exceeds his fighting skills and continues in terror of the ex-soldier’s assertion that once they find his niece he will have no compunction about killing her if she has been “infected.” If you’ve guessed that the movie plot I’ve described matches The Searchers, you’d be right – and wrong. It is also the narrative outline of Priest, an apocalyptic nightmare in which an eternal battle between vampires and human beings replaces The Searchers’ struggle between Native Americans and Western settlers. Paul Bettany reunites with his Legion director, Scott Stewart, for this live-action interpretation of Min-Woo Hyung’s graphic novel Priest. A handsomely constructed opening-credits sequence makes a nod toward the film’s source material. A voiceover summarizes the history of the epic war that precedes the film’s action. The clergy have protected their human flock by walling them into strictly governed communities while sending their priests out as vampire warriors who, long ago, succeeded in herding the creatures onto reservations. Now a human-vampire hybrid listed in the credits as Black Hat (Urban) has other plans for the social order. Priest (Bettany) and his niece’s boyfriend (Gigandet) are joined in their mission by Priestess (Maggie Q), and, unfortunately, the majority of the movie is given over to battle sequences that lack much ingenuity or narrative drive. The cinematography by Don Burgess (Source Code, The Book of Eli) is crisp and the film’s brightness and clarity don’t appear to wash out to the same degree that most 3-D movies do these days. Bettany exudes an intensity that lays the groundwork for an interesting character, but Priest hasn’t a prayer of creating anything more subtle than the giant cross tattooed on his face.

Dark Skies
Aliens mess with a suburban family's peace of mind in this unsettling, slow-burn thriller. 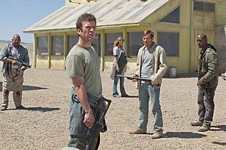 Legion
God loses faith in humanity and sends a legion of angels to start the apocalypse.