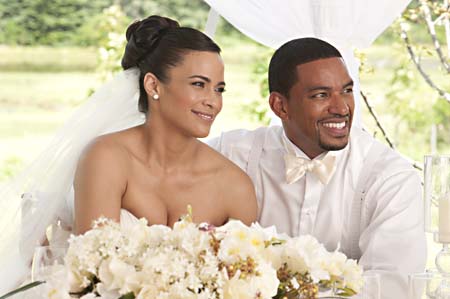 An urban family rom-com that actually has something interesting to say about race and romance, Jumping the Broom makes Tyler Perry's shrieky Madea franchise resemble Eddie Murphy's Klump family by comparison. It may not be Sam's Bar-B-Que, but it's pretty decent soul food nonetheless. Bassett and Devine are the dueling matriarchs brought together, somewhat unwillingly, on the eve of their respective offspring's nuptials. Sabrina Watson (Patton) and Jason Taylor (Alonso) seem to form a match made in heaven – as in Perry's films, there's much declaiming of spiritual faith throughout – but for their polar-opposite backgrounds. Sabrina's family lives on Martha's Vineyard and are cultured, multilingual, and in all respects a perfect portrait of African-American landed gentry (so to speak). Jason's backstory is that of a gussied-up homeboy. Mrs. Taylor works long hours as a clerk for the Postal Service, she's widowed, and her pies are, as we are informed time and again, to die for. The collision of assumed propriety – the warm, earthy mothering of Devine's Mrs. Taylor vs. the refinement of Bassett’s Mrs. Watson – is at the heart of the story, but writers Elizabeth Hunter and Arlene Gibbs ladle on more than enough unnecessary subplots and family skeletons to make Jumping the Broom feel downright overstuffed. That said, the actors, particularly the icy Bassett and the fiery Devine, excel in their roles and drive home the film’s multifaceted messages – and there are a lot of them – with verve and brio. Even minor characters get their due in well-written, nonhysterical scenes that, even if they don't render you helpless with laughter, elicit more than occasional chuckles. 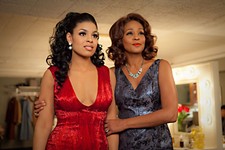 Sparkle
This story about a Motown girl group's rise and struggle also features Whitney Houston in her final screen role.