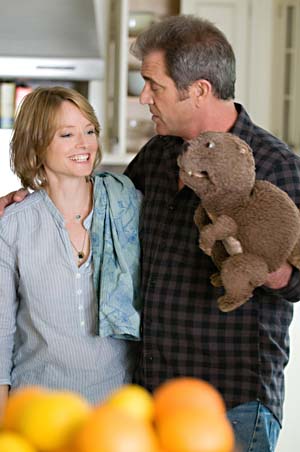 A challenging movie under any circumstances, The Beaver arrives in theatres carrying an unfair amount of additional baggage. Mel Gibson’s first acting job in a long time comes at the behest of his longtime friend Jodie Foster, whom he has known since their days filming Maverick in 1994. Foster co-stars as well as directs The Beaver, which is based on a script by Austin resident Kyle Killen that’s had a reputation as one of the best but virtually unfilmmable scripts floating around Hollywood. The film tells the story of Walter Black (Gibson), who, we are informed in the opening, is “hopelessly depressed.” A successful businessman, Walter lives in suburban Westchester with his wife Meredith (Foster), and two sons – young Henry (Stewart) and high school senior Porter (Yelchin, who is best known as Chekov in the Star Trek reboot). Each family member experiences certain interactional difficulties in the course of daily life, but none surpasses Walter’s walking catatonia. After Meredith kicks him out of the house, Walter awakens from a botched suicide attempt with a beaver puppet on his arm that starts giving him orders in a voice that takes on a cockney accent. The Beaver, as the puppet comes to be called, advises Walter that he needs to blow up his life and start over instead of trying to repair individual aspects of it. The Beaver becomes Walter’s sole spokesman, although no attempt is made to disguise the fact that Walter is mouthing the puppet’s dialogue. Strange though it is, the device proves therapeutic and allows Walter to re-engage with his family and career and achieve new successes. A parallel story about his elder son Porter, who lives in fear of becoming as mentally disturbed as his father, plays out in heartbreaking candor in comparison to the absurdity of Walter’s struggle. Foster’s direction is solid but workmanlike and no match for the vast shifts in tone and psychological subtleties required by the story. The whole endeavor never seems psychologically plausible. Yelchin and his newfound girlfriend, Norah (Lawrence, who is as moving here as she was in Winter’s Bone), lend heart to the movie, and although Gibson’s performance is spotless, it’s virtually impossible to not conflate the actor’s offscreen notoriety with his onscreen portrait of a deeply troubled man. Foster commendably stretches beyond her comfort zone with The Beaver, but in the end the film’s high-concept premise is at war with its conventional direction. (For an interview with Foster, see "Go Into the Light," May 6.)