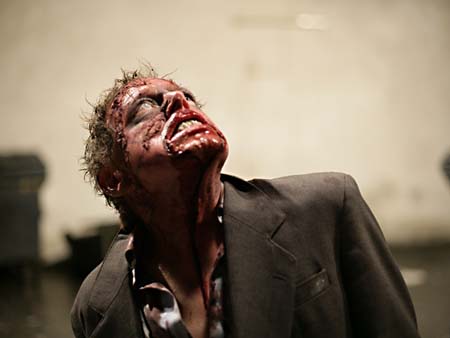 Like the frantic characters in Fantastic Fest favorite Rammbock, we, the living, awake daily to find ourselves surrounded on all sides by evidence of the the undead: shambling global economic collapse abroad, a positively moribund economy at home, and a partisan political quagmire in which our leaders appear to be dead to reality itself. Well, that would doubtless be zom-father George Romero's ever-politicized take on the pitiful current state of world affairs; Rammbock has no such overtly forthright message, and although it adds little to the already overflowing canon of zombie-genre tropes, its brief running time is chock-full o' guts. I haven't seen a German horror film this wackily despairing since Jörg Buttgereit fucked the dead (literally) with his taboo-raping ode to sex, death, and sex/death: the delightfully sick Nekromantik and Nekromantik 2, his even squishier sequel. Rammbock is billed as the first German zombie film, although personally I'd give that honor to either the metaphorical zombification within Fassbinder's Why Does Herr K. Run Amok? (think about it) or Paul Wegener's UFA-lensed Der Golem in 1920. Still, Rammbock is patently of the modernist zombie genre, and it succeeds as much as it does in large part due to the setting: the decedent-crammed areas in and around the courtyard of a dilapidated apartment building. It's something like Rear Window if Raymond Burr's wife had resurrected herself from the flower bed and gone all chompy. Fuith plays Michael, a man who finds himself trapped in his ex-girlfriend’s apartment by the slathering, speedy hordes when he attempts to return her keys. Egress is everything in these situations, and director Kren and cinematographer Moritz Schultheisse make the most of the inherent claustrophobia and lack of a clear escape route. Short, sharp, and sometimes shocking, Rammbock is a poignant slice (or is that bite?) of Berlin-based un-life. (Opens Wednesday, May 4.)