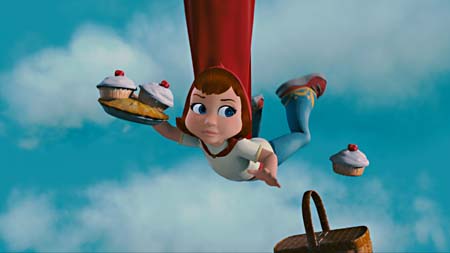 Hoodwinked Too!: Hood vs. Evil

The only entities hoodwinked by this animated sequel are paying customers – especially those who forked over the surcharge to see the pointless 3-D version. Hoodwinked Too!: Hood vs. Evil is a crass, slapdash, and nonsensical follow-up to the 2005 animated spoof of the Red Riding Hood fairy tale. What was mildly amusing and mildly successful in 2005 has degenerated into a needless fracas among random fairy-tale characters, who have all been herded into this single film like a flock of Little Bo-Peep’s defenseless sheep. Featuring new voice talent in nearly every sequence, the film is a tableau of what’s meant by the term “hodgepodge.” The plot has something to do with the rescue of Red Riding Hood’s Granny (Close) from an evil witch. But, wait, the witch is controlled by the evil-minded siblings, Hansel and Gretel (Hader and Poehler). The kidnapping occurs while Red (Panetierre) has been off training with the Sisters of the Hood and the Wolf (Warburton, whose delicious line delivery is the only recommendable aspect of the movie) has been left behind as Granny’s protector. Their rescue mission leads them from character to character, but it’s all a bunch of noise, chaos, and flat jokes. The animation quality is rudimentary and unengaging, featuring largely motionless characters with expression-free faces. Hoodwinked Too! is one Hoodwinked Too Many!