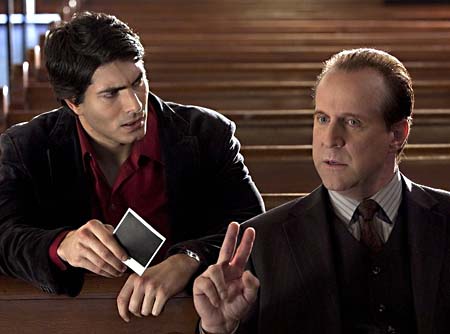 A funny thing happened on the way to the ossuary. Italian writer Tiziano Sclavi, from whose titular comic book series this film takes its name and narrative, turns out to have had his art far better served by the initially ill-received 1994 Michele Soavi film Cemetery Man (aka Dellamorte Dellamore) than by this dopey monster mash. Based on a Sclavi novel, Cemetery Man (with a droll Rupert Everett as the Buffalora, Italy, graveyard's zombie-slayer-in-chief) has ripened, like a fine corpse, in the ensuing years to become a perennial fan favorite. Director Soavi (an early protégé of Dario Argento's) heaped great shovelfuls of atmosphere and grave humor into the mix, making for a memorably surreal love story (or two) and an ultra-Italian meditation on the fragility of the human heart – with ghouls. It's unlikely that Dylan Dog: Dead of Night will achieve that same fan love. It's already bloated (like a flyblown cadaver) and hamstrung by a PG-13 rating and far too much cartoonish clowning. As in the comic books, which were (finally!) translated and released in the U.S. by Dark Horse Comics, paranormal private eye Dylan Dog (Routh) goes up against werewolves, vampires, and ancient, evil amulets in New Orleans, which is oversaturated with Argento-esque red and blue highlights. Perpetually attired in a crimson button-down, black jacket, and black pants, Routh's Dog is at least visually faithful to Sclavi's original. You could, perhaps, make the argument that the bewildering, exposition-heavy comic-book plotting here (by screenwriters Thomas Dean Donnelly and Joshua Oppenheimer), which comes off as an ad hoc blending of the Hellboy and Blade franchises, is also true to the source material, but even then only if you first read the Dylan Dog comic in its original Italian (and didn't speak Italian). Director Munroe (TMNT) is clearly a fan and attempted his best on an admittedly limited budget, but some things just don't translate that well. Throw this dog a bone? No need, he's already got a closetful.

TMNT
Back on the screen for the first time since the early Nineties, the Ninja Turtles are now animated via CGI, though their plot and character details got lost in the shuffle.