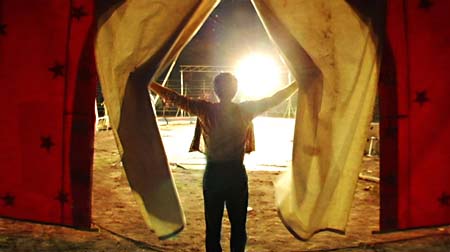 Although the subject matter of this documentary is a family-run circus that travels the back roads of Mexico, the film's themes and focus are universal and compelling. Enhanced by stunning cinematography by the film's director Aaron Schock and a soundtrack by indie rockers Calexico, Circo does more than provide an exotic peek at a vanishing way of life. The film also captures a fraying marriage and a son's sense of obligation to keep up the traditions of his ancestors. The Ponce family's touring circus bears a greater resemblance to the itinerant entertainers of yore than the three-ring extravaganzas promoted by P.T. Barnum. Tino is this circus' ringmaster/lion tamer/jack-of-all-trades. His mother and father still travel with the circus, as does his wife, Ivonne and the couple's children. But recently, both Tino's brother and sister have left the circus, choosing to live in houses with "settled" spouses. Whether they will adjust to lives contained by stationary walls remains an open question, but their absence does cause immediate gaps in the Ponces' duty roster. Ivonne, who married into this way of life, also harbors doubts about allowing her children to grow up without schooling and steady friends. Their lives are hardscrabble and full of the constant chores necessary for the circus' daily maintenance. Yet the children know no other life and declare themselves to be happier than town kids who have to go to school. In addition to the family's overall illiteracy, another worrisome aspect of the Ponces' circus life is the care of their animals, which are involuntarily subjected to the same hardscrabble existence as the humans. It's all fascinating stuff, and Schock's strong images convey a great deal about this hitherto unseen way of life. Circo ends somewhat arbitrarily and could benefit from a stronger conclusion, but its portrait of a lifestyle that's at once shabby and glittery is finely etched.