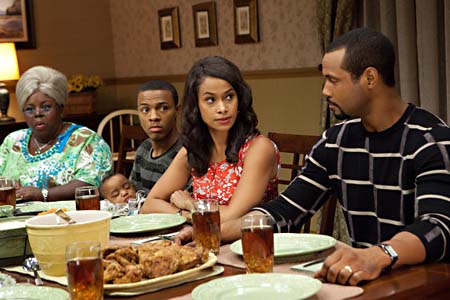 Tyler Perry is back with another movie featuring Madea – his self-essayed, no-nonsense matriarch in drag – following his bid for respectability with last year’s literary adaptation For Colored Girls and his ensemble piece Why Did I Get Married Too?, which debuted on Easter weekend, just like Madea’s Big Happy Family did this year. Maybe the logic is that people will be so glutted with Easter ham that another slice served up by Mr. Perry will slide down quite easily. Really, there is little to recommend about Perry’s Madea films, which are brokers of racial and sexual stereotypes and upholders of the importance of Christian religious faith and stern discipline (aka ass-whoopings), other than their appeal to a certain segment of black women who are underserved by the current film market. Returning also is Perry’s tendency to lump together a series of subplots under the rubric of a movie, which allows scenes to exist on their own merits and yet not be required to blend into the plot as a whole. Exhibit A would be one of this movie’s early sequences in which Madea drives through the window of a fast-food drive-through when she is upset with their service. Any relationship that sequence has with Big Happy Family’s primary plotline about Madea’s niece Shirley (Devine) needing to tell her grown children about her terminal cancer is purely tangential. Madea’s family is a fractious bunch, but the mouthy matriarch eventually lays down the law for each one of them (and in the case of their younger progeny, Madea does not spare the rod). On last weekend’s Saturday Night Live, Kenan Thompson best captured the tone of this and all other Perry movies when the character he was playing said they take “wild swings from broad comedy into dismal melodrama.” Deathbed scenes and colonoscopy humor, Bible quotations and Maury Povich “Who Is the Real Baby Daddy” episodes: All cohabit with equal relevance in the world of Tyler Perry.