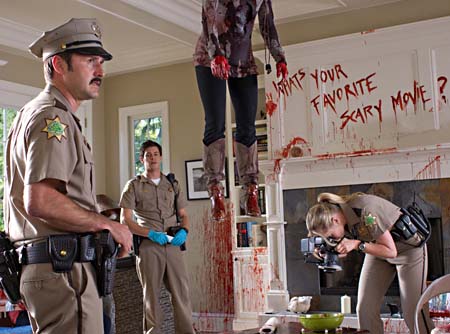 Too self-referential for its own good by half, Scream 4 attempts to reboot the by-now completely overworked slasher franchise after an 11-year hiatus. It's not a total embarrassment (that was Scream 3), but it’s also a film idea out of time and out of steam. Blood, they’ve got plenty of, though. When Craven's original Scream came out of left field in 1996, it functioned as a genuinely surprising riposte to the fallow horror-film field of the time. It took the tropes of the Eighties slasher film to heart and then recursively reiterated them throughout the movie. Craven and screenwriter Kevin Williamson (not yet the Dawson's Creek and The Vampire Diaries creator he would become) turned the slasher format in on itself with a wicked sense of gallows-bleak pomo humor, and ended up revivifying an entire genre. To Craven's credit, Scream 4 occasionally manages to kick out the genre jams and provide above-average jolts of frisson – but only occasionally. Williamson's serpentine plot has the original “final” girl Sidney (Campbell) return to the scene of the crime after crime, Woodsboro, to promote her new book about her past ordeals. Also returning are Arquette's Sheriff Riley and Cox's Gale Weathers, but their characters serve as little more than links to the series as a whole. The real thrust of the story involves the presumably more integral return of the Ghostface killer, who slices and dices his way through a new crop of attractively pithy young actors just like before. (Or is he a her? Or them? Or Ghostface Killah? Oh, fuck – what if it's us? Arrgh. Heavy meta!) Blood-red herrings abound, but ultimately, Scream 4 is a severe example of déjà vu all over again but, you know, even more so. A core problem with Scream's sequels lies in the revolving door of Ghostface killers. That leaves the franchise with no iconic boogeyman (other than the generically creepy Ghostface mask itself) à la Jason or Michael Myers, thus rendering the entire series, in retrospect, little more than an ongoing riff on what gorehounds and slasher fans – I count myself among them – are thinking about slasher films at any given moment. In that sense, the Scream series acts as something of a subcultural barometer, or maybe not. Like I said, there is such a thing as too much meta and, contrary to popular belief, irony is not always good for the bloodshed. Red Eye
Red Eye’s no classic, but with its smart, twisty little script and those two killer performances, it's a helluva lot of fun.