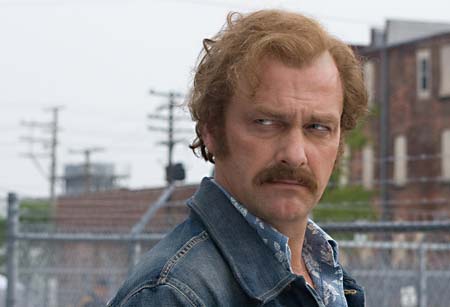 Based on actual events in the legendary life of Danny Greene, Kill the Irishman is a mobland film that’s set in Cleveland during the Sixties and Seventies. Certainly the filmmakers rounded up the right cast of tough-guy actors for this story of mob activity, but their presence doesn’t lend much vigor to this unfocused and sentimental tale. Greene was an Irish thug whose meteoric rise and ultimate undoing are embedded with the story of the downfall of the Cleveland mob and its related East Coast families. These long-term consequences are relayed during the film’s closing credits; while the film unspools, Greene is its sole focus. Greene faced a tough childhood before eventually taking a job as a longshoreman, where his boldness, brawn, and native intelligence led to the ouster of the union leader and the installment of Greene in his place. His racketeering does in his tenure there and once deposed, he works as both an FBI informant and an enforcer for the illegal numbers racket of Shondor Birns (Walken). Greene found an ally in the Italian mob functionary John Nardi (D’Onofrio), and together they attempt to take over the garbage-hauling unions. On and on the story goes, while the film is punctuated by timelines and a constant introduction of new mob characters who grow harder and harder to keep straight. Things escalate to the point that, during the summer of 1976, Cleveland became nationally infamous when the city experienced 36 bomb explosions. Many targeted Greene, although he escaped every time, which added to his air of invincibility. Fueled by his cocksure Celtic pride, Greene was an intriguing figure who was often less than loyal and sometimes contradictory in his actions. Stevenson has an imposing presence as Greene, but unfortunately his screen charisma sleeps with the fishes. Though it sentimentalizes his Irish pride, the film delves very little into Greene’s psychological profile, and its attention to the precise details of the Cleveland crime syndicate’s affairs leaves us with a surfeit of information but little of substance to hang onto. As director, veteran screenwriter Hensleigh (Armageddon, Die Hard: With a Vengeance) brings little visual flair to the proceedings and evidences no real rapport for working with actors. The only standout work in the film is by production designer Patrizia Von Brandenstein (Amadeus, A Chorus Line, Shaft), whose costumes and automobiles are perfectly curated. But other than that, Kill the Irishman talks the talk but doesn’t walk the walk. 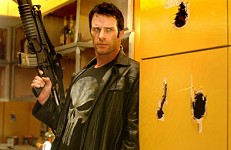 The Punisher
Strictly from the so-bad-it's-good school of entertainment.