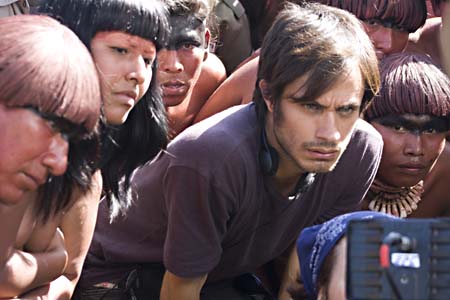 This ambitious, cycloramic narrative about a Spanish film crew attempting to mount a revisionist history of Christopher Columbus amid citizen unrest in Bolivia – a location handpicked by financiers for its cheap labor – is so potent it nearly succeeds even as a vacuum sits squarely at its center. In the opening scenes, director Sebastián (Bernal), a blinkered idealist, and his myopic, penny-pinching producer Costa (Tosar) argue the merits of Cochabamba for their base camp: Sebastián is savvy enough to point out that the Andean locals, the Quechuas, are inauthentic substitutes for the script’s Indians that are supposed to be indigenous to Hispaniola (present-day Dominican Republic and Haiti), but Costa cares only that Bolivia’s supply of “starving Indians” translates into a cast of thousands procured at discount price. Sebastián’s vision for the film – which forefronts the Dominican friar Antonio de Montesinos, a pacifist and activist for the natives’ rights – is realized in engagingly disparate ways: We see a casting call in which Sebastián cottons to a rabble-rousing local named Daniel (Aduviri); a table reading upended by the tippling actor cast as Columbus (going off-book, he stakes a patio umbrella to the ground in a comic bit of faux claimship of land, handily located next to craft services); arduous on-location shoots; and, in an electrifying sequence, the director’s closed-eyes imagining of how to direct a foot chase with armored soldiers and frothing dogs. You could argue a slender connection between Werner Herzog’s Fitzcarraldo and Sebastián’s script – both headline a colonizer strong-arming oppressed locals into the service of some mad folly, be it forcing a steamboat over land or pillaging gold from a “new” world – and you could reasonably push the comparison to include Les Blank’s Burden of Dreams, a documentary portrait of the Fitzcarraldo production’s crumble into chaos, and Even the Rain’s fictitious film crew’s own increasingly troubled shoot. Back to Daniel, whom Costa identifies early on as a “troublemaker”: In between takes, Daniel is leading a resistance against the corporate privatization of water that has crippled his community. Soon enough, the (now-famous) Cochabamba water protests have crippled Sebastián’s shoot, too. Bollaín paints an authentic portrait of a film crew in exile, and she harrowingly dramatizes the escalating violence between Cochabamba locals and the riot police that amass, with live ammunition, in the town square just as the Spaniards take terrified flight from ground zero; these scenes make for maximal tension, built on minimal dialogue. But the script, from Paul Laverty (a frequent collaborator with Ken Loach), clumsily blocks “bad” and “good,” and unconvincingly makes a case for the blatantly racist Costa’s transition from one camp to the other. Belatedly, the film declares him its nominal hero, if only for lack of another candidate. There is one, of course: the protest organizer Daniel, who is portrayed forcefully by the compact and commanding Aduviri. But Even the Rain – intentionally or accidentally, I couldn’t say – avoids Daniel’s POV, inadvertently branding him an “other” in a film that ostensibly means to erase the distinction. 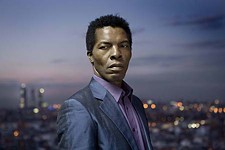 The Limits of Control
Jim Jarmusch tells an elliptical, European-set story about a loner and the criminal activity in which he's involved.

Mondays in the Sun
Monday, Tuesday, Thursday, Wednesday, Friday ... it hardly matters which day is which to the layabouts and functional drunks of this multiple Goya Award-winning film. ...