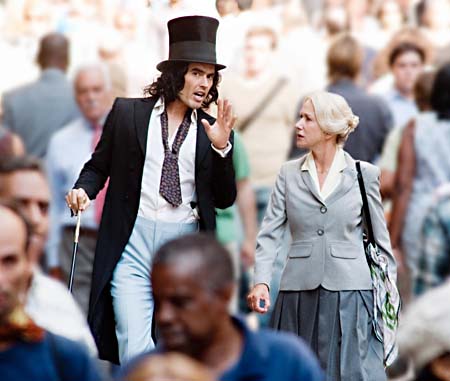 Thirty years have passed since Dudley Moore starred as the cuddly alcoholic billionaire Arthur in the original 1981 version of this film. A lot has changed in the world since then, but in movie terms, that’s not necessarily true. An entire generation has come of age since 1981 and I suspect that only those who haven’t seen its predecessor will find any laughs in this rote remake. The primary differences between the two Arthurs can be summed up as about a foot in height and a couple of sex changes. Casting Brand in the role popularized by Moore unnecessarily retains the character’s British yet somehow American identity. Brand’s demeanor is cheekier than Moore’s – he’s a bit more vituperative and willfully resistant to growing up than the original character – and of course he’s about a foot taller, too. John Gielgud’s Oscar-winning role as the butler Hobson is here transferred to Mirren, who serves as Arthur’s nanny Hobson in a switch that only serves to further infantalize her drunken charge. Also undergoing a sex change is the parent who delivers the ultimatum that alters Arthur’s life. Instead of being told by his father to enter into a loveless marriage to retain his $950 million fortune, the patriarchy has been upended so that Arthur’s mother (James) now heads up the family enterprises. Garner, in an uncharacteristic turn, plays the emasculating businesswoman Susan, whom Arthur is to wed. No sooner does Arthur consent to the nuptials than he meets working-class Naomi (Gerwig). Indie darling Gerwig provides the movie’s only naturalistic charm, although she’d be wise to guard against accepting further roles as a spiritual savior of lost white man-children. As Susan’s father, Nolte mumbles lines that are not always discernible and is utterly wasted as a fearsome father-in-law; Guzman as Arthur’s driver is also used to ill effect. (Another sign of the changing times is that this 21st century Arthur doesn’t drive under the influence; the public is no longer amused by such antics and in this new version Arthur is even made to attend a few AA meetings.) Director Winer comes from TV and most recently directed several episodes of Modern Family. His visual sensibilities are serviceable and only distinguish themselves in some courtship scenes in Grand Central Terminal. Christopher Cross’ emblematic music, “Arthur’s Theme (The Best That You Can Do)” from the original resurfaces here over the closing credits, which sadly, do not come soon enough. The film gets pretty goopy as it paces toward its predictable climax. Arthur overextends its welcome and relies too much on prop comedy. Note that Batmobile we see at both the beginning and end: Its presence has little to do with Arthur and everything to do with Warner Bros.’ early cross-promotion of their next Batman installment. Get Him to the Greek
Jonah Hill and Russell Brand make a well-matched odd couple, and their path to Hollywood is littered with the excesses of drugs and rock & roll.