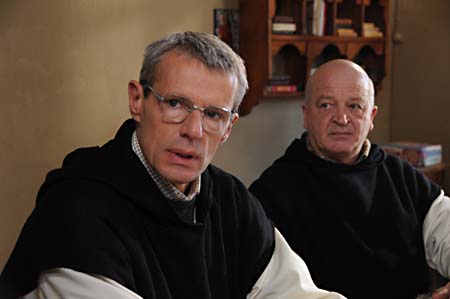 Of Gods and Men

Arriving stateside veritably encrusted with awards (the Grand Prix at Cannes among them), this seemingly simple story of Trappist monks caught between Islamic fundamentalist rebels and government forces during the Algerian civil war is in fact a deeply complex film about faith, hope, charity, and bloody, bloody reality. You don't have to be of any particular faith, or any faith at all, to appreciate the all-enveloping aura that director Beauvois conjures from the daily rituals of la vie monastique. Likewise, one need not be a Christian to grasp the merit, spiritual or secular, of the monks' mission. Led by Brother Christian (Wilson), they provide basic health care, free of charge and free of proselytizing, to the impoverished Muslim village adjacent to their tranquil monastery beneath the Atlas Mountains. No good deed goes unpunished, however, and soon enough Kalashnikov-wielding thugs are kicking up a fuss, demanding painkillers and medical aid for their wounded. On the other side is the Algerian government, which just wants these cheerily dour stoics out of the way so that they can, presumably, lay waste to the whole area. Beauvois' film is a thing of beauty on multiple levels. Working with a miraculous ensemble cast of character actors whose faces alone speak volumes, even when their actual voices are silent, Beauvois and cinematographer Caroline Champetier create a tiny island of quiet, diligent faith amid a roiling sea of uncivil chaos. There are numerous sequences of tremendous emotional power here, none more so than one in which the monks gather together to sing an ancient Gregorian chant as an Algerian Army helicopter gunship hovers threateningly overhead. It's something of a Tiananmen Square face-off, minus the overt politics, which makes it all the more spellbinding. Catwoman
The fur flies as Halle Berry tempts us in leather.