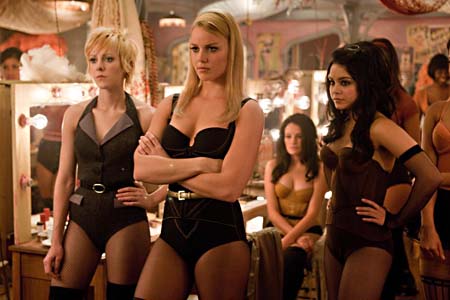 There's such ample diversion, or at least an intriguing disorientation, in the first 10 minutes or so of Zack Snyder's latest hokum opus – in the loose footing of its befuddling voiceover narration and its lurid exploitation imagery – that it takes a while to come to the solid-ground observation that Sucker Punch is appallingly bad stuff. In those first 10 minutes, we come to understand that a mental institution inmate (Browning), slated for a lobotomy in five days' time, has concocted an elaborate alternate reality as the new girl in a Sixties-era bordello. Here, she's known as Baby Doll, and indeed, Browning seems to have been cast not for any especial emotive skill but rather for her striking resemblance to a bone-china doll. (She also appears on the soundtrack, channeling Metric's Emily Haines and slow-drone-moaning her way through covers like "Sweet Dreams" and "Where Is My Mind?") In theory, the brothel conceit isn't terrible – and bonus points for a cat-eyed Gugino as the Polish-accented madam – but the utterly charmless Sucker Punch then introduces a thudding third reality, in which Baby Doll is counseled by "Wise Man" (Glenn's David Carradine-like sensei) into picking up items (a map, fire, knife, and a key) required for her "journey to freedom." As he lays out the ground rules to Baby Doll and her fellow inmates/dancers/warriors (whichever), Glenn sounds like he's reading aloud from the instruction manual to The Legend of Zelda. It's weirdly appropriate, then, that Snyder (Watchmen, 300) films these endless kung-fu-acrobatic battle scenes like a first-person-shooter game, with slo-mos, speed-ups, a 360-degree camera, and rapid-swivel perspectives. A generous estimate would place Snyder alongside Tarsem Singh (The Fall) and Robert Rodriguez (the Spy Kid franchise): artists whose distinctive, inventive visual styles far outpace their narrative prowess. But look closer, and what do you see? A creatively bankrupt succession of fetishy bromides – steampunk, Asimov, medieval times, and (personal fave!) a woman in a sailor suit, sucking on a lollipop and calling it feminism ’cause she carries a gun, too. Sucker Punch is high price to pay for such tedium.