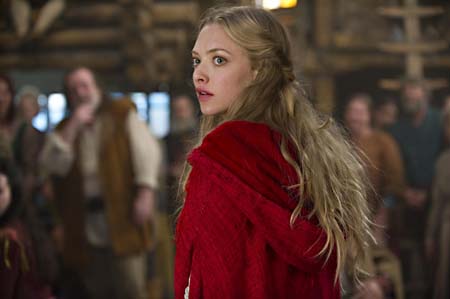 Werewolves. Vampires. What’s the diff as long as they make the young girls quiver? Why else would Hardwicke, the director of the first film in the Twilight trilogy that has helped catapult vampires into the new symbol of sex appeal, be making this overwrought and overstuffed film rendition of the famous fairy tale? To her credit, Hardwicke in her work has shown a rare sensitivity to the lives of young women, as evidenced by Twilight, Thirteen, and The Nativity Story. But David Johnson’s script for Red Riding Hood is so ludicrous and packed with nonsensical strands that Hardwicke should have seen the giant pitfalls before wading in. The Red Riding Hood fairy tale has always served as a useful parable about a girl’s awakening sexuality. (For the quintessential film treatment of the story, see Neil Jordan’s 1984 film The Company of Wolves, which is based on the short story by Angela Carter.) Hardwicke’s Red is named Valerie (Seyfried), and she has a whole host of problems in addition to her desire to run away and marry her true love, Peter (Fernandez), instead of sticking around her village to marry the richer prospect (Irons) with whom her mother (Madsen) has set her up. There’s the wolf that preys on her village during full moons, the death by wolf attack of Valerie’s sister, the werewolf-hunting priest (Oldman) who declares her a witch, the indescribable metal elephant into which the priest tosses sinners to be cooked, the burden of a secret Valerie’s mother has shared with her, and more. More problematic than the abundance of dour story strands, however, is the sometimes half-baked and sometimes overbaked look of the production design. Even though Thomas E. Sanders is credited with the design, this area was Hardwicke’s film specialty before she moved into directing, and it’s impossible to believe that she did not have an overriding say in the film’s final appearance. The characters all bear contemporary faces, although the story is set in medieval times; the village appears to be indigenous of nowhere in particular and with its white coating of perfectly packed snow, the setting somewhat resembles an artificial snow globe. This Red Riding Hood loses sight of the forest for the trees on its way to Grandma’s house.