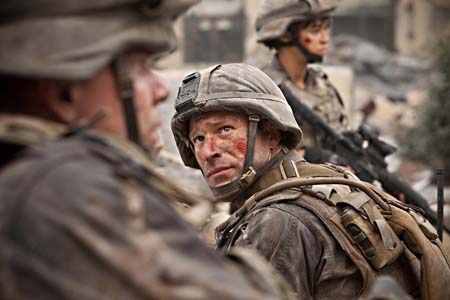 Here's to the creative team behind the titling of this Marines vs. aliens non-epic. Battle: Los Angeles is exactly what it says it is – no more, no less. Viewed as a war film, it's strictly standard run ’n’ gun fare, with Eckhart playing retiring United States Marine Corps Staff Sgt. Michael Nantz, who is called back into extremely active duty when gooey, bipedal extraterrestrials launch a surprise invasion of planet Earth. "Marines have an expiration date," Nantz's superior remarks, but the cliché-ridden battlefields of the Hollywood war movie rarely go undetonated, and Battle: Los Angeles manages to hit just about every mine in the field. Your degree of fondness for war and/or science-fiction genres will make this particular melee either comfortingly familiar or gratingly obvious. Scripter Christopher Bertolini ticks off the particulars of the platoon's instant backstory with admirable ease but far too much shopworn obviousness. Nantz is haunted by memories of the men who died under his command in Afghanistan and must win the respect (immediately, since the events depicted here take place within a three-hour time frame) of this new group of soldiers: 2nd Lt. Martinez (Ramon Rodriguez) is technically the ranking officer, but he's raw, unproven, and ultimately indecisive; the brother of Cpl. Harris (Ne-Yo) was one of the casualties in Nantz's prior posting, which results in predictable tensions between the two; et cetera. Professional badass Michelle Rodriguez is relegated mostly to the sidelines as an orphaned technical sergeant who hooks up with Nantz's ragtag group. Their mission, such as it is, is to find and rescue a group of civilians trapped inside a police station behind alien lines before a wing of B-52s obliterates all of Santa Monica. Viewed purely from a sci-fi angle, Battle: Los Angeles is even less remarkable. The aliens are scruffy-looking things in armor that use laser-blasting ground forces and unmanned (un-thinged?) air support in classically strategic fashion. There's none of the popcorn awesomeness of the giddily goofy Independence Day or even the strident satire of Paul Verhoeven's Starship Troopers. This is realistic, close-quarters urban combat of the kind best seen in Black Hawk Down. It gets points for (gore-free) realism – the effects work is top notch; you'd never guess this Battle: Los Angeles was actually shot in Louisiana – but, ultimately, it's likely to top exactly nobody's list of the greatest sci-fi, war, or sci-fi/war movies of all time. (A correction regarding the filming location has been made since this review was originally published.) Wrath of the Titans
The Greek gods of antiquity must be angry: this sequel is merely loud and uninspired.