Is it fate, coincidence, or a guiding, heavenly hand that keeps us to our daily rhythms? And exactly how free are we to exercise our supposed free will? And, most importantly, didn't Inception make a credible smash at the box office? Indeed it did, and so here is a film that will be labeled – unjustly, I think – Inception Lite. The debut feature from The Bourne Ultimatum and Ocean's Twelve screenwriter Nolfi, The Adjustment Bureau is a far less tumultuous ride than Christopher Nolan's meta-reality brainteaser; it feels less like the Philip K. Dick short story it's very loosely based on than a Charles Beaumont-era Twilight Zone episode with a couple of hard right turns into The Outer Limits. The Adjustment Bureau is, above all, a romance of chance and chaos theory of the heart. (In this respect, some viewers will recognize it as kin to the early Gwyneth Paltrow fantasy Sliding Doors.) Where Inception thrilled and titillated with dazzling eye-candy effects, and practically demanded repeat viewings in order to completely suss out the picture's multilayered meanings, Nolfi's film deploys a much simpler – but no less engrossing – gambit. Damon plays David Norris, a New York state congressman with a bad-boy past and one eye on a bid for the Senate. After a crushing defeat, however, he bumps into Elise (Blunt, radiant) in a men's washroom. It's love at first sight, but David is so harried and befuddled he doesn't even catch the lady’s name, much less her phone number. But that doesn't matter, because fate – or something like it – keeps throwing the two of them together, seemingly at random, over and over. Enter the men in the gray flannel suits: mysterious members of the titular bureaucracy, who patiently explain that David and Elise are not, in point of fact, meant to be together. David's predetermined course in life must be "adjusted" back in line with the chairman's master plan. (The capitalized, proper-noun pronunciation clues you in – or not – to this unseen entity’s proper identity.) From here on out, it’s a battle between David's alleged free will and the chilly, omniscient Adjusters, who are led, in an inspired bit of spot-on casting, by Stamp, who hasn't had a role this tantalizing since his turn in Steven Soderbergh's The Limey. He brings to the improbable plot an ethereal weight that banishes all doubt and suspends disbelief with gritty aplomb. Nolfi's debut is a mild stunner, mixing hope and heart and love and the dire threat of losing it – or, worse, never realizing you had it – into a heady, original mix. More, please. 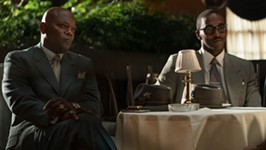 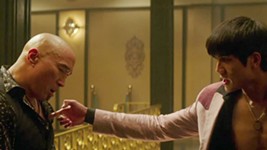 Birth of the Dragon
Bruce Lee: the early years