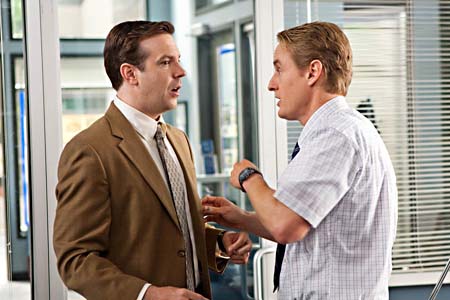 The Farrelly brothers have always been hit or miss, but when they hit – in There’s Something About Mary or the underrated Stuck on You – their signature raunch is sweetly tempered by daffy high-spiritedness. But there’s nothing but bottom-feeding in Hall Pass’ cynical, tin-eared attempts to make comedy out of the seven-year-itch: Its ugh-ing offensiveness may begin with the unsophisticated, “Har, it’s a schlong!” humor, but it ends with the unendurable tedium of flat-footed plotting and shudderingly antiquated ideas about gender relations. Wilson plays Rick, a pleated-pants soccer dad with a roving eye; when his wife, Maggie (The Office’s Fischer), becomes fed up with his horndog leering, she gives him a weeklong “hall pass” from their marriage, freeing him to leer, or even cheat, to his heart’s content – the theory being that he’ll get it all out of his system and return to family life with renewed vigor. Wilson – who is so much better than this it hurts the heart a little – is a zero, a barely there bore in a film he ostensibly headlines. That, I suppose, is an improvement over co-star Sudeikis’ subzero toxicity: As another husband enjoying a week off, Sudeikis does the heavy lifting in terms of the film’s aggressively off-putting foulmouthedness. A caricature at best, but a cartoon buffoon more regularly, Sudeikis makes a poor foil for Wilson and an even worse catchphrase-trademarker (the film tries ad nauseam – emphasis on the nausea – to make a cunnilingus gag about “fake chow” catch on). Hall Pass bears all the narrative finesse and visual pizzazz of an According to Jim episode, only dun-colored with fecal propulsives tapped not once but twice for punchline value. Cruel to its women characters and careless with its men (it doesn’t even try for audience empathy), Hall Pass has half the right idea: Scratch out “Hall,” and just … pass. 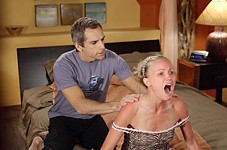 The Heartbreak Kid
Ben Stiller stars in this smart and winning remake of a 1972 Neil Simon-penned comedy about a man who falls in love with another woman on his honeymoon.