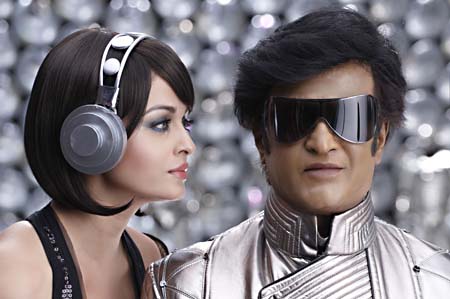 Endhiran is an absolutely crackers Indian/Tamil sci-fi/action import. Sporting a $34 million budget and all that that allows, Endhiran is reportedly the most expensive Indian/Tamil production ever filmed, which is apparent from the opening titles to the closing crawl. The story, like many Kollywood productions, feels cobbled together from all corners of global pop culture and includes narrative elements that are heavily indebted to James Cameron's Terminator films, various permutations of Frankenstein, the Matrix trilogy, Stephen Chow's madcap action oeuvre, and even, I kid you not, late-era Elvis Presley. And then, of course, there's the fact that the filmmakers sought the likes of the Oscar-heavy special-effects outfit Stan Winston Studio (Iron Man, Avatar), composer A.R. Rahman (who picked up his own Academy Award for Slumdog Millionaire), famed martial-arts fight choreographer (and Fantastic Fest Lifetime Achievement Award winner) Yuen Woo-Ping, and costume designer Mary E. Vogt (the Men in Black trilogy). The end result is nearly three hours of traditional Kollywood tropes colliding head-on with a supremely effects-driven science-fiction melodrama. The storyline – often a stumbling block for Western audiences unfamiliar with the all-singing, all-dancing, masala-mania of the form – is, for once, simplicity itself. Brilliant but emotionally unavailable robotics scientist Dr. Vaseegaran (superstar Rajinikanth) creates a superpowered android in his own image but fails to pay enough attention to his paramour, Sana (Bachchan). Dubbed "Chitti," the robot – also played by Rajinikanth – falls for Sana after the implantation of an "emotion chip" (shades of Star Trek: The Next Generation's Lt. Cmdr. Data), with predictably unpredictable results: Chaos reigns, and the entire world is imperiled. The film’s intricate, frankly jaw-dropping action set-pieces (including a breathtaking train pursuit) are outrageous in their sheer mind-melting audacity. This being a Kollywood picture, there are huge amounts of ham-on-rye mugging among the cast (particularly from yukmeisters Karunas and Santhanam). There are also sudden uprisings of dance, dance revolutions, dodgy English subtitles, and thousands of extras, all of whom seem to have earned their degrees from the Janet Jackson School of Mid-Nineties, Terpsichorean Strut-Rock. If you've never before entered the riotous, hyperstylized, and just flat-out fun world of Kollywood filmmaking, you could do a lot worse (and I do mean a lot worse) than Endhiran. Good, bad, and weird in equal amounts, it's the best apocalyptic sci-fi-romcom-melodrama-dance-off date movie of the year.