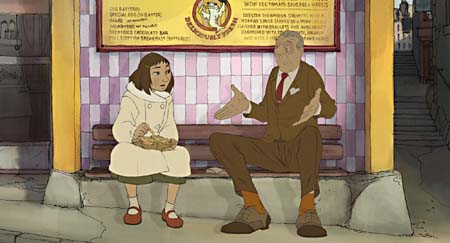 Far different from Chomet's Academy Award-nominated 2003 film, The Triplets of Belleville, The Illusionist springs, as if by post-mortem conjuring, from the imagination and pen of Jacques Tati, the late and canonical French director of the character-bound Monsieur Hulot movies. One of several scripts Tati wrote but never got around to filming, this heartbreaking and gentle farce was originally intended to feature Tati and his young daughter. But now its adaptation into the realm of animation has resulted in a picture that is at once mesmerizingly beautiful and subtly, emotionally nuanced in a way that only Pixar’s animated features have managed to approximate of late. It is, voilà, not just the most magnificent animated film of the past year, but also, simply, one of the best films of the year, period. Tati, I think, would be delighted. Chomet creates a timeless tale set, apparently, in the mid-to-late Fifties. It begins in Paris, where a dignified, older gentleman-magician finds himself crowded out of the theatres by the advent of pre-British Invasion rock & roll caterwauling, which packs the house with screaming teenagers but leaves his own audience disastrously depleted. Nearly broke, the nameless illusionist takes his act (including a snappish rabbit in the iconic top hat) on the road to Scotland, eventually landing in Edinburgh. Along the way this overcoat-wearing, slightly befuddled anachronism attracts a young stowaway, Alice, who becomes both a helpmate and source of fresh vitality for the aging illusionist. Beyond the lovely simplicity of the story – there's hardly a full line of dialogue throughout, as was common in Tati's own films – sublime sight gags (many briefly glimpsed in the background, making this an ideal film to see more than once) are abundant. You'll have your own, but my favorite involves the illusionist wandering into an Edinburgh movie house, which is screening – quelle surprise! – Tati's Mon Oncle. The resulting collision of the animated Tati and and his flesh-and-blood counterpart is as inspired as anything I've ever seen in an animated film, and even this bit of comic genius is treated within the larger framework of the story as something of a throwaway gag. The Illusionist is absolutely mandatory viewing for aspiring animators and filmmakers. (In terms of pacing, scoring, editing, and narrative, it's a film school unto itself.) For the rest of us, however, it's simply magic. 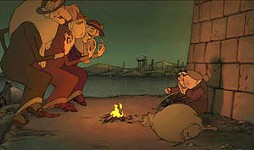 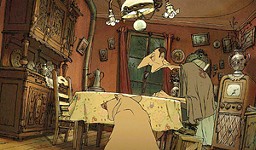 The Triplets of Belleville
Move over Disney and Pixar: Sylvain Chomet’s Oscar-nominated animated feature is the kind of work that could only be authored by a singular individual.