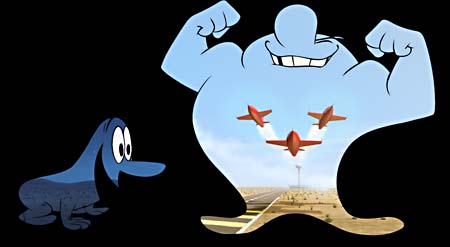 Toy Story 3 is pretty much a lock to win Best Animated Feature at this year’s Academy Awards, and don’t be surprised if there’s a trickle-down effect. The Pixar short “Day & Night” screened before Toy Story 3 in theatres, and therefore has been seen by roughly a gajillion more people than any of the other nominees for Best Film Short (Animated). (Granted, Academy members are required to see all five nominated shorts to be eligible to vote, but don't underestimate the value of market saturation.) Its frontrunner status shouldn’t be held against it, though: Teddy Newton’s “Day & Night” is a six-minute spot of magic. When Day (blobby) and Night (Mr. Bubble-esque) make each other’s acquaintance, it begins as a pissing contest – they use their bellies like screens to project their best attributes (Day has bathing beauties; Night boasts a neon Vegas strip) – then inches toward détente, and finally ends in a giddy and raucous epiphany that “otherness” is to be celebrated, not feared. That’s a three-act arc in a half-dozen minutes using next to no dialogue: Such narrative economy! Other shorts are not so, well, short. The German/UK co-production “The Gruffalo,” for one, takes a slight but sweet Aesop-like tale about a mouse that thinks fast on its feet and stretches the story to fill almost a half-hour length. While it’s never anything less than lovely to look at (even if the titular Gruffalo bears close resemblance to Maurice Sendak’s wild things), the narrative, which is based on a children’s book, has limited appeal for older audiences. Geefwee Boedoe’s “Let’s Pollute” inverts the problem: A satirical promo for pollution presented like one of those peppy educational films of yore (“Pollution: It’s your privilege and your duty”!), the short’s irony and real intent, I suspect, will be lost on children. Adults, alternately, may bristle at the film’s insulting attitude, even as they marvel at its remarkable, faux-handmade aesthetic of cloth swatches and needle stitches. French animator Bastien Dubois’ “Madagascar, Carnet de Voyage,” an impressionistic travel diary, has all the narrative sophistication of one of those “get to know a new culture!” chapters in your high school French textbook, but “Madagascar” is the prettiest short in the bunch. Dubois has a cinematic eye for framing and movement, and his style of animation veers wildly, electrifyingly, from photo-realistic to painterly to minimalist. The final nominee, Andrew Ruhemann and Shaun Tan’s “The Lost Thing,” is about an Australian boy who discovers on a beach the title’s lost thing, which turns out to be a sort of mechanical/extraterrestrial hybrid with spindly alien legs and whirring cogs and gears. An appealingly melancholy piece that marries a sun-bleached setting to a steampunk cast of characters, “The Lost Thing” beautifully services both pictures and plot.