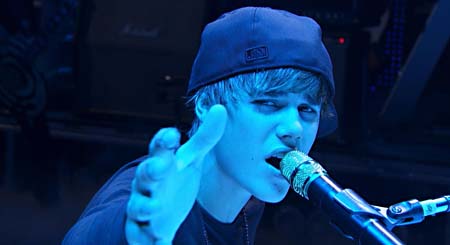 Although this film has not exactly made me into a full-fledged Belieber, it has at least shown me the wisdom of never saying never. Capitalizing on the meteoric success of teen phenomenon Justin Bieber, this movie has been rushed into theatres before the screaming girls responsible for Bieber’s superstardom have a chance to hit puberty. To complain that this part concert film, part biopic is repetitive or goes on too long just proves that I am not the target audience for Bieber overindulgence. For his fans, I suspect the extensive sections of offstage Bieber footage do not seem mundane and unvaried. Especially the frequent clips of him shirtless. As a feature-length movie, the material lacks momentum, but as a love offering to the fans, Justin Bieber: Never Say Never is pure catnip. There is as much biographical footage here of Bieber growing up and becoming a teen sensation as there is of him onstage singing and dancing. The material helps explain how a moderately talented singer and dancer such as Bieber can suddenly seize the spotlight of the world’s center stage. And it clearly requires more than ownership of the world’s most perfect hair – although that’s a significant visual aid. Home-movie clips from Bieber’s babyhood reveal his innate musical instincts, impeccable timing, and easy stage presence. It’s clear that his drive to perform comes from something within him rather than family pressure or expectations. A lot of screen time is given to his manager (and film producer) Scooter Braun, mentor Usher, and record producer L.A. Reid. Through their commentary, we can begin to glimpse the machinery behind the Bieber phenomenon, but Braun is the only one who exudes any inclination toward hucksterism. We hear from Beiber’s grandparents, see him with his boyhood friends in Canada, witness the prayer circle prior to every performance, glimpse inside the tour bus, and observe a lot of backstage footage of Bieber goofing around as the 16-year-old kid he was at the time of the filming. The film’s greatest insights come at the beginning and end, as the film emphasizes how Bieber Fever circulated entirely through social media outlets. He is the first YouTube superstar who has been able to jump from that platform to selling out Madison Square Garden in 22 minutes. That’s impressive, no matter the nature of your gig. Still, when Bieber is joined onstage by Usher, the older man’s seasoned professionalism puts Bieber’s young moves in check. It’s definitely not hard to understand what the little girls see in Bieber, and this film delivers the goods. This one’s for the fans, not the movie buffs.