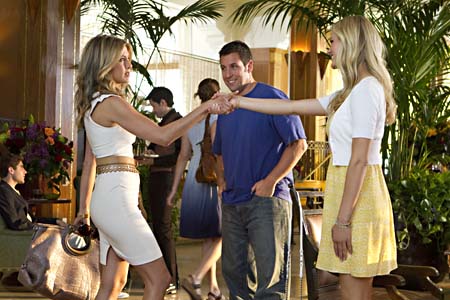 Just Go With It

When it comes to romantic comedies, neither Sandler nor Aniston has been knocking them out of the park as of late, so the idea of pairing these likable stars in Just Go With It may be the film equivalent of doubling down the bet. It’s true the result is a mite better than Aniston’s last four indistinguishable movies, and it's certainly more substantial than Sandler’s most recent film, Grown Ups. However, Just Go With It does little more than live up to the advice put forth by its lackadaisical title: The film has a self-satisfied air, and rather than making things seem effortless, the entire comedy has the appearance of being effort-free. The direction by Dugan, Sandler’s frequent director, is indifferent and formulaic, and too much of the film’s humor has the whiff of smug superiority. Just Go With It is an update (by Allan Loeb and Timothy Dowling) of the 1969 film Cactus Flower, which was written by the titan of acerbic comedy screenwriters, I.A.L. Diamond (Some Like It Hot, The Fortune Cookie). The plot derives its momentum from a series of lies told by the characters that, without a frothy mixture in which the characters and audience together can lose sight of their objectivity, become coarse and intelligence-insulting. The deceptions on which Just Go With It depends are so patently obvious and threadbare that it demeans the characters and viewers to have to pretend to not see the truth behind the contrivances. Add to this the film’s gratuitous jokes about ugly people and gay stereotypes, and you have a movie that is content to simply grab for the low-hanging fruit (so to speak). Aniston and Sandler, pros that they are, still find moments of lightness amid the humdrum story mechanics, and Decker is every bit the actor one expects a swimsuit cover girl to be. The only real surprise in the movie is Kidman’s comic turn in a supporting role. Abandoning the ice-queen demeanor she has exuded of late, Kidman reminds us of the delightful comic chops she displayed earlier in her career in Gus Van Sant’s To Die For. Kidman is the only refreshing thing in the movie. Otherwise, Just Go With It is an exercise in stagnation.