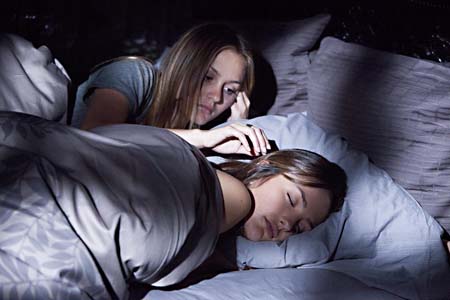 It’s only February but I can already name the year’s winner of the Most Thoughtless Gay Stereotype in Film award. The dubious honor goes to The Roommate, in which TV minxes Kelly (Friday Night Lights) and Meester (Gossip Girl) go head-to-head as college dorm mates. This unoriginal creeper is modeled on the form’s exemplar, Single White Female, the nearly 20-year-old movie whose success had everything to do with the keen eye of its director, Barbet Schroeder, and the talents of its stars, Jennifer Jason Leigh and Bridget Fonda. In The Roommate, Rebecca (Meester) and Sara (Kelly) arrive at the fictional University of Los Angeles from very different backgrounds. Rebecca is a wealthy Beverly Hills kid with a vast wardrobe and no friends, while Sara hails from Des Moines and makes friends easily. Though Rebecca is clearly troubled, it’s not until a Thanksgiving dinner with her parents (Fisher and Arana) that Sara discovers her roommate is off her meds. Still, it would take more than bipolar disorder to explain Rebecca’s lethal doings and borderline personality. First, the nuisance phone calls from Sara’s ex-boyfriend come to a curious halt. Then Sara’s adulterous design teacher (Zane), who has just hit on her, suddenly disappears. Next the girls’ beloved kitten comes to a suspicious end. Sara’s new boyfriend Stephen also gets the evil eye. It’s all textbook stuff, so the camera’s crosscutting shots of Rebecca and Sara’s lips grazing while each is engaged in sex with others (well, Rebecca’s sexual partner is in her head, but what else is new?) seems as gratuitous as the extreme close-ups in the film’s shower sequence. On that aforementioned Thanksgiving trip, Sara also discovers another girl who seems to have been the object of Rebecca’s unwanted affections. Until The Roommate, it had seemed as if the movies had advanced to the point where it is no longer customary to depict psycho killers as frustrated homosexuals. But first-time screenwriter Sonny Mallhi seems to have missed that remedial class. Further impediments to this film’s credibility are the facts that all the actors appear too old to be playing college students and the characters live on a campus that is eerily deserted. In good conscience, The Roommate cannot be given a passing grade.

Papa: Hemingway in Cuba
A young writer travels to revolutionary Cuba in 1959 to meet his idol