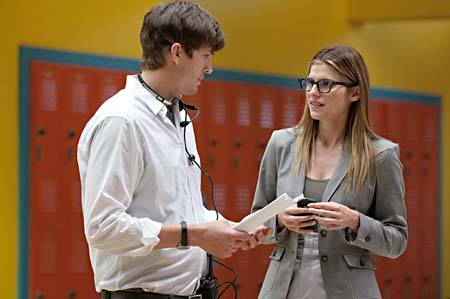 No Strings Attached has a hell of a find: a nervous beauty who can precision-time a pratfall and win an audience’s heart just by biting her lip. Too bad Lake Bell’s not playing the lead. That honor goes to Natalie Portman, who verily snarls her way through this romantic comedy. Last fall, critics dinged Going the Distance – unfairly, I’d argue – for leaning too hard on the raunch. They should’ve saved their pitchforks for No Strings Attached, which takes all of a few minutes to make its first fingering joke. There’s nothing inherently wrong with coarse comedy, and certainly no more so when it’s coming out of the mouth of a woman; in fact, there’s much to recommend the sandblasting of stodgy old ideas about sugar and spice and everything nice. But it helps if an actress looks like she’s at least having fun with so much foul-mouthing. Portman plays Emma, a harried, relationship-averse first-year resident who thinks she’s hit the jackpot when she and Kutcher’s Adam, a casual acquaintance smarting from a fresh breakup, agree to become friends with benefits (or "fuck buddies," which was the original title of Elizabeth Meriwether's buzzy, Black List script). The arrangement predictably snags when Adam realizes he wants to get to know Emma out of the bedroom, too. The script has few fresh ideas but a decent share of zingers; the problem isn’t so much with Meriwether's construction as with Ivan Reitman’s listing direction – honestly, has he made a truly likable movie since 1993's cuddlesome Dave? – and casting. Engaging comedic actors like Gerwig, Kaling, and Thirlby have next to nothing to do but fan Portman like brutalized bridesmaids, and the only real purpose of Bell, who plays Adam’s high-strung coworker on a High School Musical-like TV production, is to provide misdirection (Adam flirts with the idea of dating her instead of the emotionally withholding Emma). Bell steals every scene she’s in, and her abrupt dismissal feels all the crueler for so much charisma wasted: She shoulda been a contender. 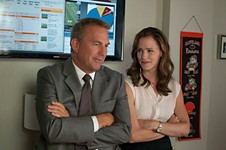 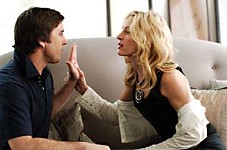 My Super Ex-Girlfriend
High-concept farce crashes down pretty low: Think Fatal Attraction meets X-Men and you basically have the gist.