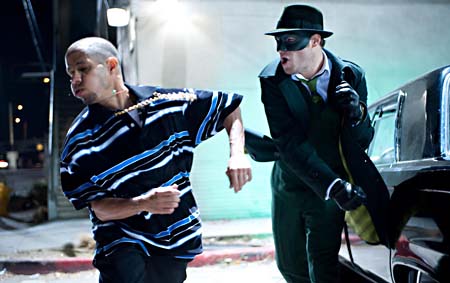 Not quite as bland as Van Williams in the 1966 TV series and by no means as instantaneously unforgettable as Williams' hai-karate-kicking onscreen partner, Bruce Lee, Gondry's update of vigilante crime fighter the Green Hornet's escapades is above all an exercise in frustration. Calling it Mr. Gondry's film seems hardly fair, though; the script, by Rogen and Evan Goldberg, has the miscalculated bromance vibe of Judd Apatow on an Iron Man 2 bender. And tonally, this is about as far as one can get from Gondry's usual darkly fanciful milieu (which includes Eternal Sunshine of the Spotless Mind and the underrated The Science of Sleep). It feels like a job taken on to pay some bills, but anyone involved in the production who's thinking "franchise" should think again. Rogen, slightly miscast (although you can see what they were aiming for), plays Britt Reid, the wealthy, arrogant, spoiled, party-happy scion of a big-city newspaper publisher. As played by Rogen, Britt embodies the worst character defects of Bruce Wayne minus the stoic panache and single-minded drive. He is, in effect, a buffoon, and the script piles on unfunny comedy throughout, even (especially) after Britt's father dies and, seemingly on a whim and with nothing much better to do, Britt lassoes Dad's mechanic and latte-expert Kato (Taiwanese pop star Chou), with the intention of becoming a masked master of menace, seemingly out of sheer boredom. After much Apatow-esque talk of fulfilling destinies – and it all sounds like so much hooey coming from this relentlessly off-putting windbag – Britt and Kato manage to upset the criminal balance of power and attract the attention of Russian crime kingpin Chudnofsky (Inglourious Basterds' Waltz, who doesn't even bother to attempt an Eastern European accent, much less a Russian one). Diaz wanders in and out of the story as Britt's comely secretary, but it's just a shadow of her role in The Mask and, as written, could have been played by pretty much anyone other than Phyllis Diller. I fear that more mediocre heroics may be headed our way now that Marvel and DC have cornered the Awesome Market, but even so-so Hornet forerunners like The Phantom (and certainly downright thrilling one-shots like The Rocketeer) are more entertaining than this cheesy and borderline-boring cream puff of a vigilante. 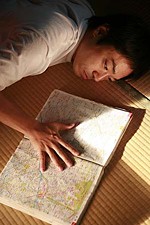