Season of the Witch

Granted, it is indeed as cold as a witch's teat outside, but this painfully earnest and overblown medieval swords-and-sorcery road movie is unlikely to warm the cockles of any but the most die-hard fans of Cage's stentorian growl and arch overacting. Cage was just coming off Werner Herzog's Bad Lieutenant: Port of Call New Orleans when he climbed onboard this doomed crusade, so he can perhaps be forgiven for acting the fool, but it still boggles the mind how this immensely talented and occasionally fearless actor (see the aforementioned Herzog for said fearlessness) so frequently lashes himself to projects that seem like terrifically awful career moves. Season of the Witch isn't Ghost Rider, quite, and it does have two excellent reasons to catch up with it at the dollar matinee: Perlman and the still-regal Lee. That's about it, though; the rest of the cast, Bragi F. Schut's hamfisted script, and Sena's lumbering, Uwe Boll-esque direction are enough to make you wonder what Uwe Boll's been up to lately. Set in the midst of the Crusades and sporting CGI fire and brimstone to match, the plot pairs Cage and Perlman as, respectively, the pensive Behmen and more foursquare Felson, two weary deserters of the Crusades intent on returning home amid the plague-ridden squalor of pre-EU Europa. Only home is not as they left it. A witch (Foy) has been accused of unleashing the pestilence that has poisoned the land, and Lee's horrifically disfigured and dying Cardinal D'Ambroise charges the dispirited pair with transporting the (alleged) sorceress across hill, dale, and rickety rope bridge to her final judgement. Accompanied by a quartet of token victim-characters straight out of the muckier scenes in Monty Python and the Holy Grail (although Graham's Hagamar is more nuanced and enjoyable than expected), Behmen and Felson endure CGI-laden existential despair, wolves, demon wolves, and, finally yet more demons. Things do not end well, least of all for the audience, who may well slip out midway through to check out the infinitely more unnerving Yogi Bear. As for Foy's (alleged) witch? She'd have been better off turning everyone into a newt in the first place. 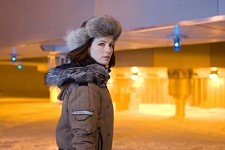 Swordfish
It's difficult to synopsize Swordfish, to whittle it down to a digestible nugget. The film (directed by Gone in 60 Seconds' Dominic Sena) is a ...