Remember the San Francisco Steakhouse? For mid-dinner entertainment, they’d put fishnetted entertainers in Gold Rush-era costumery on a tasseled swing and tell the women to kick higher and higher until they toe-picked a cowbell up in the rafters. That’s kind of what Blue Valentine feels like, with its obsessively mapped arcing and actorly ding-dinging at every emotional beat. There’s so much to admire in Derek Cianfrance’s marriage-in-crisis miniature that it’s that much more frustrating when it falls short of its promise. Williams (perfectly pitched) and Gosling (overdoing it) play a pair of lovers whose narrative is bisected into now – as a weary married couple raising a 5-year-old on a tight budget – and then – when they were flush with new love in their early 20s. Gosling's Dean is a character instantly familiar in this town: He's a working-class hipster with mannered hair and a goofy grin. (One critic expressed puzzlement over the character's prowess with a ukulele and the Tin Pan Alley sound, but Dean's from Brooklyn – what more do you need to know?) It's easy to understand why Williams' Cindy – a suburban girl from a volatile home who dreams of becoming a doctor – would fall for the passionate, excitable, and imaginative Dean, and it's just as easy to understand why those same qualities would repel her five years on. There are bracing moments throughout that feel not just knowing but true: Cindy's hard recoils from her husband's touch, Dean's same-wavelength merry-making bond with his daughter (and the foreknowledge that while she will grow out of it, he never will, which is why Mom is at her wit's end). But those moments, as affecting as they are, can't surmount the over-workshopped feel of the whole film. I admit: I couldn’t be more the target audience for this film, as an ardent enthusiast of both the actors and this kind of trigger-point, talk-heavy relationship drama. But Blue Valentine is so keen on convincing us of its grubby, emotional-guts-splaying realism that the effect is quite the opposite: to throw the film’s artifice into stark relief. 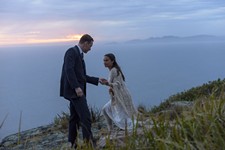 The Place Beyond the Pines
A melodrama, multigenerational epic, heist film, and motorcycle-fetish movie are all rolled into one in this Ryan Gosling and Bradley Cooper headliner.