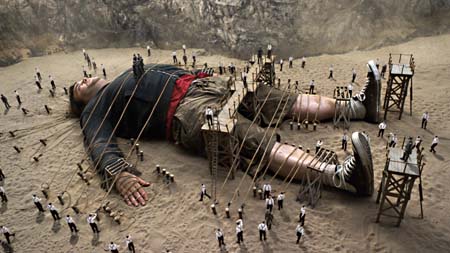 As disinterested in itself as Gulliver’s Travels seems to be, it’s a wonder it ever came into existence at all. The film reveals little exertion made on behalf of the narrative, lackadaisical attention paid to the possibilities of 3-D and other state-of-the-art special effects, and careless direction of the actors, who often sound as though they’re talking (albeit in clashing Lilliputian accents) to nothing more than a green screen. People have been making film versions of Jonathan Swift’s classic satire since the dawn of cinema. Frequently, the filmmakers are animators like Dave Fleischer or optical wizards and magicians like Georges Méliès – filmmakers who look to the medium of film to tell stories in ways that books cannot. But if not in possession of a clever new way to remake this oft-told tale, why do it at all? This new film shows no interest in social satire, the characters or the relationships among them, or the expert deployment of special effects. The film’s use of 3-D only serves to darken the screen and wash out the color. Gulliver’s Travels is a story that screams out for superior visual effects but the images achieved here are hardly more effective (or three-dimensional) than the panels in a Classics Illustrated comic book. It seems the only forethought given to this remake was to cast Jack Black as Gulliver since he’s the closest thing we have to a living cartoon and, hell, he was one fine panda. Black appears as lost in this film’s wraparound segments as he does once he’s marooned in the land of Lilliput. The actor plays Lemuel Gulliver, who lives in contemporary New York, works in the mailroom of a publication called The New York Tribune, and pines ineffectually for editor Darcy Silverman (Peet). Instead of getting the girl, he gets a travel-writing assignment: a boat trip to the Bermuda Triangle. Once shipwrecked in the Court of Lilliput, Gulliver’s adventures there follow much of Swift’s basic plot, inserting crass modern touches such as urinating on a fire to squelch it and adding a romantic subplot in which Gulliver resorts to Prince lyrics when his best Lilliput pal, Horatio (Segel), declares his love for Princess Mary (Blunt). The film’s liveliest sequence is probably the completely gratuitous music video of "War (What Is It Good For?)" performed by Gulliver and the Lilliputians. Blink and you’ll never follow the plot shift that migrates Gulliver to the land of the giant Brobdingnagians. This Gulliver’s Travels is listless, dull, and totally lacking in spectacle: marooned with no way home, just like its title character. 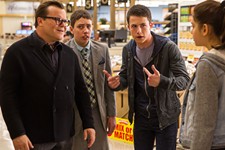