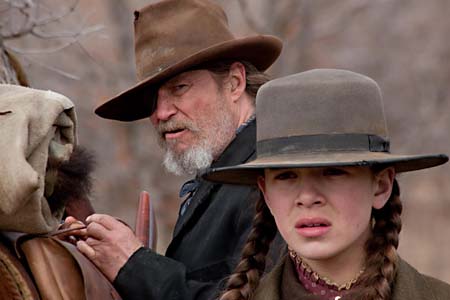 Charles Portis’ best-selling novel True Grit provided the source material for the 1969 movie that earned John Wayne an Oscar for his larger-than-life portrayal of the “fat, one-eyed” U.S. Marshal Rooster Cogburn, as well as this remake by Joel and Ethan Coen. Some reviewers have compared this new film to the Coen brothers’ No Country for Old Men in terms of its Western setting, while at the same time incorrectly commenting on the brothers’ unusual tackling of a generic Western, as though the distinctiveness of the pair’s vision existed sui generis, apart from the entire history of film and its generic breakdowns. They forget that the Coens broke onto the film scene with Blood Simple, a contemporary take on classic film noir. Throughout their entire careers, these writer/director/producer/editors (their editing is conducted under the pseudonym Roderick Jaynes) have tweaked genre tropes, most commonly comedy, injecting large doses of very black humor into otherwise frothy concoctions. (See Burn After Reading, Intolerable Cruelty, and O Brother, Where Art Thou? for examples.) It is the dark comedy inherent in the language of Portis’ novel which, no doubt, drew the Coens to this remake. (Remember that the last time the Coens went out for a remake – the comical crime film The Ladykillers – they exaggerated the comic aspects of the characters and achieved very mixed results.) The Coens’ version of True Grit remains faithful to the Portis novel, although much of the book’s humor falls flat in the course of its delivery in the film. Only Damon, as the Texas Ranger LaBoeuf (which he pronounces "LaBeef") captures a real sense of the boneheadedness of his character’s grandiloquent language and self-importance. This True Grit sticks with the novel’s structure of having 14-year-old Mattie Ross narrate the story as a reflection on events that occurred decades before. Mattie (Steinfeld, a terrific young newcomer to the screen), more than the others, is tasked with delivering the formal language, which often gains its humor from its sanctimonious undertones or the contradictory solemnity and cleverness that emerges from the mouth of one so young. Mattie hires Rooster Cogburn (Bridges) to capture the man who killed her father, and here the comedy differs from the original screen version, which existed as a showcase for John Wayne, whose performance exaggerates the cornball drunkenness of the marshal. Bridges plays it straighter, giving the role a lived-in feeling and abandoning all sentimentality, although whatever line of thought which led to the actor delivering lines in a mumbling, back-of-the-throat growl is a true mystery. Photographed by the Coens’ longtime cinematographer Roger Deakins, True Grit (much of which was filmed here in Austin and in nearby Granger) has some handsome sequences but overall lacks these filmmakers’ usually precise eye. The scenes filmed within the historic towns too frequently betray the set-dressing propping them up, and the ones filmed out on the range often show traces of the trompe l’oeils involved in modern moviemaking. And there is just no excuse for the kind of errors in True Grit that would otherwise cause students to get bounced from film school. These instances – such as the one in which Mattie crosses a river on horseback and emerges completely dry – are unpardonable (though, to be fair, maybe the Coens were mimicking the original, which flubs the same match cut). All this is not to say that the Coens’ True Grit is an awful film; it’s just that these filmmakers have set their own standards for excellence, and True Grit falls short. 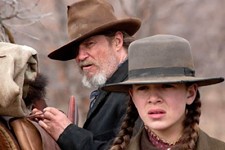 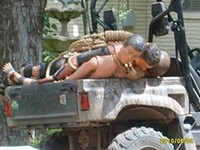