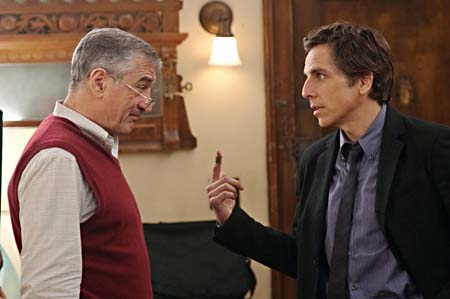 Apart from the smutty giggles that derive from the mere mention of the Focker family surname, this third entry in the now 10-year-old comedy franchise falls flat. Following Meet the Parents in 2000 and Meet the Fockers in 2004 – the films that traced the courtship and marriage of Greg (Stiller) and Pam (Polo) Focker as they learned to integrate all four off-kilter in-laws into their lives – the couple is now residing in Chicago and raising twins. Greg (né Gaylord – apparently “Gay” Focker is a joke too far) and Pam are remodeling a house and planning their children’s fifth birthday party. The filmmakers went to the effort of hiring Keitel to play the construction foreman on their new house and then squander his presence by giving him only a couple lines of dialogue in a total of two scenes. (He should have been paid by the syllable.) They also throw out the Keitel with the bathwater when they have him go face-to-face with De Niro and then have the characters back off, neither one saying a word. This is typical of the movie’s bait-and-switch approach, which creates expectations of a historic reteaming of the two acting legends and delivers zilch, and also replaces the promised mirth with juvenile smut. Just because the humor plays to our most childish instincts, I’m not sure that should qualify Little Fockers for a PG-13 rating. Consider these episodes: A sexually rapacious pharmaceutical rep (Alba), whose name – Andi Garcia – is milked for endlessly obvious laughs – has chosen Greg to be the spokesman for her company’s new erectile dysfunction drug, Sustengo. During their introductory meeting, she unnecessarily demonstrates her unique skills as an enema-giver. In another sequence, Jack Byrnes (De Niro) tries Sustengo, and when the pill’s effects don’t subside after the recommended four hours, Greg is required to inject an antidote into his father-in-law’s penis – a scene made even more “comical” when it is witnessed by one of Greg’s 5-year-olds. The film repeats the name “Focker” more times than you can imagine and gets added mileage from Jack wanting to anoint Greg as new family patriarch, whom he terms the “GodFocker.” The twins’ birthday party provides the film’s extended climax, but its lackluster highlights include grown men fighting in bouncy castles and an impromptu kiss between Pam Focker’s ex-boyfriend Kevin (Wilson) and her mother-in-law (Streisand). The concluding sequence of the movie unites both families during the holiday season, a choice that seems to promise more Focker films to come, offering as they do ecumenical possibilities of Jewish and Christian amity for the busy movie-going week of Christmas.