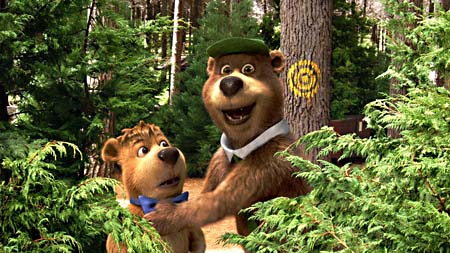 Yogi Bear is unbearable. There, I said it. Maybe I react this way because of seeing one too many movies this year that mix human live-action with animated animal shenanigans. (Blame the success of Alvin and the Chipmunks for all the studios trying to launch their own furry franchises.) Maybe I’m out of touch, but I don’t recall hearing a hue and cry for a revival of Hanna-Barbera’s ursine star Yogi Bear and his sidekick, Boo Boo. Nevertheless, the stars of The Yogi Bear Show, which ran on TV in the early Sixties, have clawed their way onto the silver screen. All but the very youngest viewers will prefer that they had remained in hibernation. Yogi (voiced by Aykroyd in a good approximation of the original, which was voiced by Daws Butler) still lives in Jellystone Park and still proclaims himself “smarter than the average bear.” Aided by Boo Boo (voiced by Timberlake), he devises elaborate plots to separate park visitors from their “pic-i-nic” baskets and continues to have the same spotty success. The talking bear makes life difficult for Ranger Smith (Cavanagh) but is one of the lures that brings documentary filmmaker Rachel (Faris) to the park to shoot a film. When the corrupt local mayor (Daly) decides to sell Jellystone’s logging rights, the bears and humans join forces to obstruct the sale. (Never mind that mayors have no jurisdiction over national parkland – this is a movie that stars talking bears.) Appearancewise, the live action and animation walk fine lines that never quite blend into a believable composite. Brevig, a special-effects wiz who made his directing debut in 2008 with the 3-D Journey to the Center of the Earth, primarily exploits the 3-D in Yogi Bear for primitive projectile effects hurled in the audience’s direction. Even the usually reliable Faris is unable to lend any spark to the proceedings. Only the youngest, most undiscerning viewers will want to decamp to Jellystone. 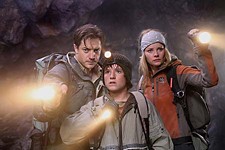 Journey to the Center of the Earth
The new version of this Jules Verne classic provides gentle fun, but without the 3-D visual effects "comin' right at ya," this journey's center will not hold.